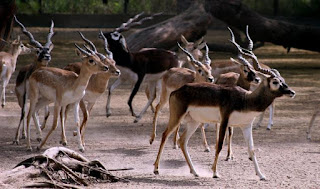 Pranahita (Blackbuck) Wildlife Sanctuary, established in 1980, is one of the oldest protected areas of Telangana and is an ideal 'blackbuck habitat' with scrub jungle and mixed deciduous vegetation and scattered grasslands.
The Envirnoment Ministry has declared an area ranging from 0.1 kilometer to 5 kilometer from the boundary of Pranahita (blackbuck) Wildlife Sanctuary in Telangana as ESZs.
Pranahita Wildlife Sanctuary is located in Chinnur-Mancherial forest
division and covered area of 136 sqkm by Pranihita River. It is in Chinnur, Mancherial distrcit, Telangana. It is about 300 km from city of Hyderabad and 35 km away from Mancherial town

This sanctuary lies exactly between the latitudes 18 °41’ N - 19° 9’ N and longitudes 79°9’E - 79°57’E.
The Pranahita wildlife sanctuary covers an area of about 136sq.kms and is full of lush and dark teak forests. The river Pranahita carves its way in to this amazing sanctuary making it even more beautiful.
Pranahitha River flows adjoining the eastern boundary of sanctuary while Godavari River runs towards the southern boundary of this sanctuary, which is also renowned for the presence of prehistoric rock formations. The major wildlife found here includes Star Tortoise, Panther, Sloth Bear, Crocodile, Python, Indian Bison and Tiger. This Wildlife Sanctuary is one of the oldest and well protected wildlife areas of Telangana and was established in 1980, in Adilabad district in the northern part of the state.
Flora and Fauna
There are huge number of animals are found in Pranahita Wildlife Sanctuary such as nilgai, sloth bear, jackal, black buck, panther, tiger, lion and cheetal. You can also birds like Teals, Herons, Brahminy Ducks, Storks and many birds.
It is famous for Blackbuck and over 20 species of reptiles, over 50 species of birds, over 40 species of mammals.
Wildlife lovers can spend a great time here watching the Indian Porcupine and other species of wild animals such as Hyena, Wild Dogs, Palm Civet, Indian Otter, Rhesus, Langur, Forest Cat, Sloth Boar, Leopard, Tiger, Nilgai and many more. The scrub jungle and the grasslands here is an ideal habitat for Blackbuck.

A Phytosociology analysis was carried out during 2006 and 2009 to study the vegetation status of this sanctuary. They also analyzed the recruitment and regeneration of Pranahitha vegetation. Recent years, the sanctuary is losing its glory. The construction and barrage on the Pranahitha River may deter tigers that cross over from Tadoba sanctuary of Maharashtra. The construction of canals may divide the habitat making the situation more difficult for various animals to freely move about and also lead to cultivation of these shrub lands both legally and illegally. The ultimate result is the shrinking of this beautiful forest land in those areas falling under Chennu, Kotapalli, Vemanpalli and Jaipur mandals where the effect of environmental degradation has devastated the widespread teak forests. Additionally, the construction work carried out on Nizamabad – Jagdalpur NH 16 has resulted in significant erosion of soil and resulted in increased traffic on the roads. The net result is the increased disturbance to animal life.

Accommodation : At the forest rest house at Mancherial and Chinnur.

Access
By Air: The nearest airport is Hyderabad; 300 kms from Pranahita.
By Road: It is about 70 Km. from Mancherial which is well connected to most of the cities of India.