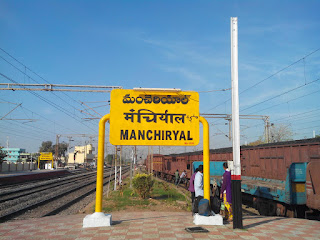 Mancherial is previously called as "GARMILLA". Mancherial is known for its commercial activity and coal belt, the newly-carved district situated in the north bank of the Godavari.

The quarry at Gadpu, Gandhari Garden at Mandamarri, twin streams at Bhimaram, the Godavari river flowing towards north and a series of seven tanks built by the erstwhile Nizam are some of the tourist attractions that lend beauty to the district’s landscape.

Rail: Mancherial railway station is located on the one of the biggest railway line in India (New Delhi-Chennai ). It is well connected by rail from various metro cities in India.

Air: Nearest Airport to the Mancherail is Hyderabad International airport Rajiv Gandhi International Airport (250km by road, 3hrs of journey by train(AP Exp). There is also one proposal to construct new airport at Basanth nagar(ramagundam) which is 20-30 km from Mancherial. Once it is operational, it could be the nearest airport.

From Mancherial to Portugal, a trip to glory !


At the age of five years, he lost his father and from then on, the job of bringing him up was left to his mother, who sold and still sells tea at the railway station in Mancherial, in erstwhile Adilabad district.

Dulam Satyanarayana received the biggest gift of his life in the year 2016, when his film Welcome to Telangana , promoting film locations in the State showed in 3 minutes, the natural splendour that the State had. Invited by ART & AMP, TUR International Film Festival for its competition, the film was awarded the Best Tourism Film at Portugal.

Well, for most of his life, this 30-year-old has spent watching movies, cricket and reading whatever books he could lay his hands on.

He spent four years after his Intermediate education, preparing unsuccessfully to get into the Indian Institute of Technology. He then moved to Chennai and studied engineering at Anna University.

He bunked college again, watching DVDs that he bought at Burma College in Chennai. “I must have watched over a 1,000 movies over two years and it was during that period that my perspective changed. “I wanted to be a filmmaker. In 2008, I made short film on Moushuni, a tiny island in the Sunderbans and a village that did not have electricity,” he says.

It was in the year 2010 when he made a documentary film on fluorosis in Nalgonda district that drew the spotlight on him. It led to the Government of unified Andhra Pradesh taking up a protected water supply scheme for 25 villages . It did not end there.

The United States Department of State offered him a scholarship in 2011 to study at the Scottsdale School of Film and Theatre at Arizona.

He made about a dozen short films, before being spotted by the powers-that-be in the Telangana government, post June, 2014 and was asked to make short films on the government’s flagship programmes including the green ‘Haritha Haaram’ and on Mission Bhageeratha.