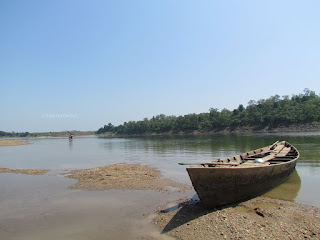 Entire Pranahita River acts as border between Telangana and Maharashtra.
Districts : Komoram Bheem Asifabad, Mancherial, Jayshankar Bhupalpally.
The Pranhita begins at the confluence of 2 extensive rivers - the Wardha and the Wainganga. This junction lies on the border between the states of Maharashtra and Telangana near Kouthala(near Sirpur kagaznagar). Right at the onset, the river enjoys a wide river bed.

Pranhita is the largest tributary of Godavari River covering about 34% of its drainage basin conveying the combined waters of the Penganga River, Wardha River and Wainganga River.

By virtue of its extensive network of tributaries, the river drains all of Vidharba region as well as the southern slopes of the Satpura Ranges. It flows along the border of Gadchiroli district in Maharashtra and Adilabad district in Telangana. The Pranhita sub-basin is the 7th largest in India, measuring about 1,09,078 km2 making it larger than the individual basins of significant rivers like the Narmada and Cauvery.

The Pranhita begins at the confluence of 2 extensive rivers - the Wardha (catchment area: 46,237 km2) and the Wainganga (catchment area:49,677 km2).This junction lies on the border between the states of Maharashtra and Telangana near Kouthala(near Sirpur kagaznagar). Right at the onset, the river enjoys a wide river bed.

The river follows a short course of 113 km strictly adhering to the boundary between Gadchiroli district in Maharashtra and Adilabad district in Telangana.The direction of flow is southward unlike most rivers of the Deccan Plateau. Along its course the river is flanked by thick forests and harbors a rich biodiversity of flora and fauna. After completing its short journey the river empties itself into the Godavari River at 170 feet in Kaleswaram.
The terrain and thick forest cover in the adjoining areas of Maharashtra does not allow it feasible tapping of water from the two tributaries in its territory.

The project was originally conceptualised as the Dr B.R. Ambedkar Pranahita-Chevella Sujala Sravanthi project. In accordance with the Godavari Water Disputes Tribunal (GWDT) report of October 1975, Maharashtra and Andhra Pradesh had agreed to share the river’s waters for some projects at the appropriate time, one of which was the Pranahita-Chevella project.

However, later, that project was divided into two parts Dr B.R. Ambedkar Pranahita Project and Kaleshwaram Project. Two reasons were provided for this. First, it is assumed that the availability of Godavari water is better at Medigadda. Second, Maharashtra raised objections to Tummidihatti as it believed that large swathes of its own area would get submerged.
Dr.B.R.Ambedkar Pranahita project
To divert 20 TMC of water by constructing a barrage across river Pranahita near the confluence of Wainganga and Wardha rivers at Tummidihetti (V), Koutala (M), Adilabad District for irrigating an ayacut of 2,00,000 acres in East Adilabad district against the original proposed 56,500 acres in the district.
Kaleshwaram project  have three barrages at Medigadda near Kaleshwaram, Annaram and Sundilla between Medigadda and Sripada Yellampally Project and reservoirs at another 18 places.
The three barrages would have a storage capacity of over 28 tmc ft together and the reservoirs would have another 157 tmc ft. The Kaleshwaram project requires 4,500 MW power for lifting water in different stages including, 113 meters till Yellampally reservoir. From Yellampally, it would be lifted to Mid Manair and from there to Anantagiri, Imambad and Mallannasagar reservoirs. From Mallannasagar, the water would flow through gravity to Upper Manair and reservoirs in Nizamabad and Adilabad districts.
This project is expected to be a blessing for the people of Telangana by utilising as much water as possible and is spread over in 7 districts of Telangana (now 13 districts after re-organization of districts in the state) through components such as canals, tunnels, lift systems, reservoirs, and distributory network for irrigating an ayacut of 18,25,700 acres against the original proposed ayacut of 16,40,000 acres. Further, it is proposed to stabilize the existing ayacut in other major projects viz., SRSP Stage-I, SRSP Stage-II, Flood Flow Canal, Singur & Nizamsagar projects to an extent of 18,82,970 acres. Besides irrigation, drinking water (30 TMC for twin cities & 10 TMC for enroute villages) & water for industrial use (16 TMC) is also proposed.
Further, after careful planning, theproposed capacity of reservoirs is increased from11.43 TMC to 147.71 TMC by enhancing the capacities of existing reservoirs and proposing new reservoirs to match the demand and supply.
It has been proposed to divide the work into 28 packages in six links, including five packages for the first three barrages.