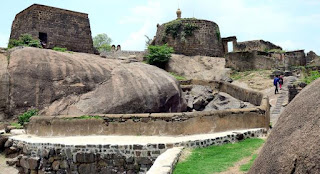 Manair River (a tributary of the Godavari River), approximately 10 kilometres (6.2 mi) from Karimnagar on the Kamareddy Road in the Indian state of Telangana.
The Elagandal fort is situated in a hillock presents a picturesque view of Elagandal. “Elagandal khilla” is the name of the fort on the hill. The magnificent facade of the fort attracts tourists.


In olden days it was also called as Bahudanyapuram and it was called veliganadu during Kaktiya times.

The inscription dated 1202 AD found on a stone slab at chintamani tank belongs to Chaunda Preggada of Malyala family subordinate of Kakatiya Ganapatideva.

Elgandal Fort is one such structure that takes us to an Utopian world. The big archways, doors, minarets, water tanks inside the fort depicts the life inside the fort. At a time, Elgandal Fort was a priced possession for any ruler and today it is one of the must-visit heritage sites near Karimnagar.

Elgandal was a major centre that witnessed major political dynasties including the Kakatiyas, the Bahmanis, the Qutub Shahis, the Mughals and the Nizams.
This place is historically important because 5 important dynamic sites ruled over this place. The antiquities of the place worth mentioning are
A fort on a hill.
Brindavan tank on the outside of the eastern gateway of the fort by Zafar-ud-Doula in 1754 A.D. with minarets that oscillate when shaken and tombs of the Muslim saints like syed Shah Munawar Quadri saheb, Doola Shah saheb, syed Maroof Saheb, Shah Talib Bismilla Saheb and Vali Hyder saheb.
On the 11th and 12th days of Moharram, and annual Urs of these saint's is celebrated by the Muslims and Hindus alike with great reverence and people from far off places participate in it.
Besides, there are temples of Nelakantha Swamy and Narasimha Swamy.
It was once under the control of the Qutub Shahi dynasty, the Mughal Empire, and the Nizams of Hyderabad. During the Nizam era it was the headquarters of Karimnagar. It is believed that a secret tunnel connects Elgandal Fort and Manakondur some 9 kilometres (5.6 mi) from Karimnagar on the Karimnagar-Vemulawada highway.
Originally known as Veligundula, Elgandal is a hillfort built during the Kakatiya dynasty (1083–1323) and served as a stronghold for the warrior Musunuri Nayaks and Recharla padmanayaks.
The Qutb Shahi dynasty occupied the fort in the 16th century and posted Quinamul Mulk as commander. Subsequently, it fell under the administrative control of the Mughal Empire.Amin Khan was appointed as Khiledar of Elagandal during the reign of Nizam of Hyderabad Nizam-ul-Mulk, Asaf Jah I (r. 1724–1748) followed by Muqarrab Khan.
Mirza ibrahim dhamsa became Khiledar during the reign of Nawab Salabat Jung. Dhamsa rebuilt and strengthened the fort in 1754 during the reign of Sikindar Jha (r.1803-1823). Bahadur Khan and Karimuddin served as Khiledars. Karimnagar was named after Karimuddin. While reorganizing the districts, Mahbub Ali Khan, the Sixth Nizam, shifted the District Headquarters from Elagandal to Karimnagar in 1905.
Elgandal's rulers surrounded the fort with a crocodile filled moat of around 5 metres (16 ft) wide and 4 metres (13 ft) deep to prevent enemy incursions.

The site also houses a mosque and an eidgah, the designated place for special Eid prayers.