November 12, 2016
Domakonda fort is an instance of architecture for defence
against external invaders. 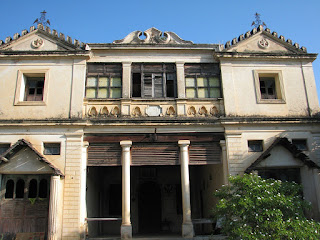 Located 4kms from NH 44 and 10 kms from Kamareddy.

The fort was constructed on a circular plan and has two ways to enter one on the east and other on the west and there are four bastions in four directions. Two places and one temple complex are situated in the fort.
The fort was controlled by Chalukyas of Kalyani and the Kakatiyas.

Domakonda was a samsthan under the Qutub shahis and Asif Jahis.

1786 AD : Raja Rajeshwara Rao I
Built Domakonda fort in the 18th century at a sight where a fort existed earlier.

Shifted capital from Kamareddy to Domakonda in 1786 AD.

Umapathi
The entrance to the fort has an arched gateway reflect­ing Asaf Jahis influence. The fort has bastions both square as well as circular, built at irregular intervals. Inside the fort are two palaces and a temple complex. The temple dedicated to Shiva was built on stellate plan, imitating the Kakatiya style of architecture. This fort is an example of the defence architecture of the princely states of Telangana.
It has an elevated compound of granite rocks that forms the fort wall, followed by a wooden door on an entrance door to the beautiful two-storied fort structure, which consists of great stuccowork and is considered eye catchy even to this day.This fort is also called "Gadi Domakonda" or "Killa Domakonda" as it houses a palatial mahal inside and popularly called "Addhala Meda" (Glass house)

The Kaminenis built majestic palaces and temples for Lord Mahadeva. The castle with the fortification wall has withstood ravages – manmade as well as natural, and is considered symbolic of erstwhile rulers of the region. Locals throng here to observe on festive occasions with gaiety.