November 16, 2016
Dharmapuri is situated at a distance of about 48kms. from Jagityal town and 51 Kms. from Peddapalle railway station 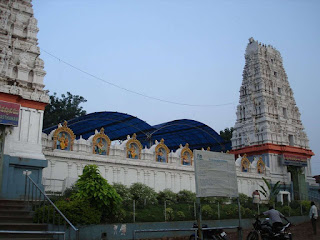 Dharmapuri attained religious importance owing to the existence of the shrine dedicated to Narasimha Swamy, an incarnation of Lord Vishnu. Lord Siva With Dakshinamurthy, Vinayaka and Sapitha Mathrukas carved on a single slab of stone and Mahishasuramardhani, the sixty pillared temple, Mahalakshmi temple, Akkapalle Rajanna.

An over five hundred year old Sri Sita Rama Swami temple are the other temples of importance that heighten the sanctity of this The
Ramalingeswara Temple which is of about 1000 years old, is in the proximity of the Narsimha Swamy Temple. It is said among local inhabitants that the Shiv Lingam installed in this temple was installed by Lord Rama during his exile and on way to Lanka in search of Sitha Maatha.

It is famous for temples and artists, located on the banks of holy river Godavari. It is called Dhakshin Kashi.

The name of this place as Dharmapuri and Dharmapuram in the two Sthalapuranas both titled “Dharmapuri Kshetra Mahatyam”, dated 928 A.D82 and 1767 A.D.83 Historically we find the name of this place in an inscription of Arikesari-II (930-955 A.D) of Chalukyas of Vemulavada, at Kurikyala of Gangadhara Mandal. This place was known as Dhammanvura, Dhammampuram.

Further, we see the name of this place as Dharmapuri and Dharmapura in an inscription of Vikramaditya IV (1076-1126 A.D) of Chalukyas of kalyani on the stone in the Rameswara temple at Dharmapuri. It records the gifts to the Rameswara.

Malki Singana mentioned is this place as “Dharmapuram” in his Uttara Khanda of Padma Purana (1420 A.D).

The great Telugu poet Bammera Potana (1400-1470 A.D) mentioned
this place as Dharmapuri in his Narayana Satakam.

Again, this place is also mentioned by Korai Goparaju (1430-1490 AD) in his Simhasanadwatrinshika.

This place as “Dharmapuri” was mentioned in “Kalapurnodayam” by renewed Telugu poet Pingali Surana(1560 AD).

In which the sorrows of the victims of Rohillas at Dharmapuri are described. In the modern period this place was mentioned in “Dharmanagada Charitra” which is also known as “Pamupata” by Puri Narayana Raju, wherein the importance of river Godavari at Dharmapuri is given and mentioning Dharmapuri, a sacred place.

Dharmapuri boasts of the only temple for Yama in the country

Several hundreds .of devotees from various parts of the State and also from the neighbouring States have arrived in large numbers at Sri Laxminarasimha Swamy Devasthanam in Dharmapuri of Jagtial district on Tuesday to worship Lord Yama Dharmaraja (God of Death).

This is the only temple shrine in entire country where Lord Yama (God of Death) is worshipped.

The devotees who visit the Dharmapuri temple shrine first offer prayers to the Lord Yama at his temple before offering prayers to other deities. The devotees pour oil in the “Yamaganda deepam” to get rid of their sorrows and sufferings.

Temple priest Bojja Ramesh Sharma told “The Hindu” that the annual “Yama Dwitheeya” which is celebrated on second day after the Deepavali festival, marking the visit of Lord Yama to his sister Yamuna Devi’s house for lunch, attains more importance to appease the God of Death. On this occasion, the devotees perform the special pujas such as “Ayoosha Sooktham homam” for longevity and good health and special abhishekhams, he maintained.

It is also believed that Yama promises his sister that people who offer prayers on this day (Yama Dwetheeya) would not go to hell and they would get rid of all sorrows and sufferings. Similarly, it is believed that people having ‘Bhagini-hastha’ (food served by one’s sister) on this day would enjoy longevity and cleansed of their sins, the priest said.