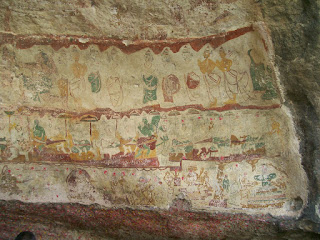 The Neolithic or New Stone Age
began when humans invented agriculture. Neolithic people learned how to farm and domesticate animals and are not nomadic. Domesticate means to to train a wild animal to be useful to humans.

Rock paintings found in Telangana reveal the love humans had for art and nature as long ago as 10,000 BCE. These paintings also reveal that a plethora of wild animals existed across the length and breadth of the state once upon a time.An interesting rock painting is that of a giraffe at Pandavulagutta in Warangal, as in the present world giraffes are found only in Africa. One can get a glimpse into the prehistoric man’s mind by looking at rock art which exists on walls and ceilings of caves, rock shelters and isolated boulders.

The civilization was rather a hybrid one in the sense that the archaeologists have to deal with a number of peoples, brought together by a common culture of which the salient features are (1) agriculture, (2) domestication of animals, (3) pottery- making, (4) polishing of stone implements, and (5) in the later period developing of techniques of metallurgy. All the pottery from the earlier Neolithic period was of hand made. Burnishing with a dabber or spatula was probably a later development.

Material Culture
Out of the material remains of the Neolithic people, which survived
the ravages of time, was the stone-axe, made out of igneous or metamorphic; rocks, such as diorite, dolerite and basalt, The other less common varieties are small tools either hafted or used as adzes, small chisels, picks, fabricators, hammer-stones and sling stones, etc.
Thogarrai - Nalgonda
A prolific factory-site was discovered over one of the hills at Thogarrai near the source of a dolerite dyke. Large number of axes were collected from the spot in various stages of manufacture.
The tools collected from the factory site at Thogarrai appear to
have been manufactured in an Acheulian factory site. All the tools have been made out of dolerite and the author collected many a tool which are in their final stage of manufacture. The trap rock from which the tools were made is found in small handy nodules. A large number of primary flakes and chippings of the tools indicates that the Neolithic man took large nodules and adopted alternate flaking method, usually noticed in the Acheulian sites. This method is intended to get a straight cutting edge on both the sides. Whenever he could not find a convenient core to get two cutting edges he adopted the method of blunting one of the cutting edges similar to that of a backed blade, 'as noticed in the 'Late Stone Age tools. Later the blunted edge was again flaked alternatively to get a triangular body. The alternate step flaking gives the sharp zig-zag cutting edge but with high ridges on both the sides. These high ridges, as suggested by Subbarao, must have been removed with a painted tool, such as a cylindrical-type fabricator found elsewhere. The cutting edge, on both the sides, was made sharp by removing small neat flakes along it.
KADAMBAPUR - Karimnagar
Kadambapur, about 5 km. from Thogarrai, where a number of Neolithic stone-axes were collected over the sloping plains of the hills, abutting river Maneru. Many rock shelters and caverns, noticed in the hills, must have been occupied by the Early Neolithic man. A number of grinding grooves were noticed over the granite outcrops, Extensive exploration had not resulted in the discovery of any permanent settlement, But a few sherds of hand-made grey ware, collected betwixt the river and the plains, may imply that the
Neolithic settlement might have been eroded away by the seasonal flood of the river, as at present the river bed is not more than 2 m, deep.
KOLAKONDA - Warangal
Kolakonda village, on river Peddavagu in the Jangoan taluk
of Warangal district, is another important Neolithic settlement, which is situated in between the granitoid hills on the east and the river on the west to a stretch of 200 square metres approximately.

DEVARUPPALA - Warangal
It is a considerably big village near Mondrai in the Jangoan taluk of the Warangal district. The Neolithic settlement is situated at about 2 km. south of the village, over the black cotton plains near the granitic hills.

POLAKONDA - Warangal
Polakonda, a small village on the road from Jangoan to Suryapet
in the Jangoan taluk of Warangal district, is about 10 km. from
Devaruppala and approached from Mondra. To the north of the village
and abutting the Peddagutta hi11, an early historical site was noticed. A good number of polished stone-axes was observed over the early historical site, the plains and the sloping terraces on the south-west of Peddagutta hill.

While exploring a channel, dug-out recently by the Public Works
Department, along the Kommulagutta hill (a northern extension of
Peddagutta), a few sherds of hand-made grey ware of Neolithic
affinity were recorded. Adjoining the channel, and at the find-spot of the grey-ware sherds a trench was sunk, which revealed a hearth of burnt clay, associated with a large number of hand-made Neolithic pots and a broken axe. A granite rubber with a squarish profile and evidently used for burnishing pottery was also found near the hearth. The rubber was finely ground on one side and pecked on the other.

The Neolithic settlement over the sloping terrace at the foot of the Kommulagutta hill spreads to an area of 100 sq. m. The soil to a depth of more than 3 m. was covered with sandy silt, brought down from the neighbouring hills by the rains in course of time. Abutting the habitation is a shallow rivulet, emerging from the gorges of the hill, Though dry at present, the nullah must have been much deeper during the Neolithic times, else there is no other source of water in the vicinity.

The historical mound, lying by the side of the Karimnagar-Pedda- pallr road, Many Neolithic stone-axes were collected on the surface and in the unrelated cultural strata. The entire historical site
was covered by a deposit of black soil, not more than 2 m, in thickness at any spot. There are neither granite hills nearby for his shelter nor the dykes of dolerite for making his tool-kit. Apparently the tools must have been imported from places like Kadambapur or Thogarrai, etc. Peddabankur is an example where the Neolithic man, instead of selecting a hilly region, settled over the plains, possibly to serve his farming.

BUDIGAPALLI - Karimnagar
Excavation over the early historical mound, established the presence of Neolithic-Chalcolithic occupation at the lowest level. A few Neolithic celts, associated with Microlithic cores, blades and lunates, a few steatite beads and a hearth hand-made grey ware pottery are the finds recovered.
Art and Painting
The works of art of the Neolithic people, depicting the socio-
cultural life, have survived in the form of rock-paintings and decorations on the pottery and brusings on the rocks and terracotta objects. Rock paintings situated at: Regonda and Budigapalli in the Karimnagar district, Kokapet in the Hyderabad district, Mundamala in the Mahboobnagar district.

The Proto And Early Historical Cultures Of A.P by V.V.Krishna Sastryhttp://www.slideshare.net/ashleyrollins/the-paleolithic-era-and-the-neolithic-era