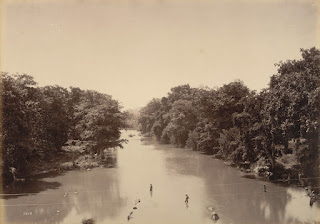 Pakhal lake is situated amidst unspoiled forest in Pakhal wildlife sanctuary near Pakhalashoknagar Village, Khanapur Mandal, Warangal District, Telangana State, India. 'Pakhal' literally means 'a large container of water' and is a Sanskrit derivative. According to the inscription set up on the bund , it was constructed during Ganapatideva by Jagadalu Mummadi, son of the minister Bayyana Nayaka and Bachana nayaka around1213 AD, Maudgalya tirtha close to the temple of Siva-Ramanatha. By the side of the tank he built a splendid city called Ganapura and granted a mansion and five martula of land to Kavichakravarti. The Pakhal Lake is an eloquent testimony to the engineering expertise of the Kakatiyas. Many artificial lakes were constructed during the Kakatiya period. The average depth of the lake is from 30 to 40 ft. The lake is a reservoir created by dam across Pakhal river, tributary of the River Musi.It was built to serve as source of water for irrigational purpose.
Shitab Khan had the Pakhala tank repaired which still serves many farmlands in the area and is now a picturesque tourist spot. It is the largest artificial piece of water in the State, the length and breadth being 8000 and 6000 yards, while the dam is more than 2000 yards long, and the water covers an area of nearly 13 square miles. Bayyana Nayaka wife was Bachamamba and their sons were Peddana - Ganapati , Nalia - Ganapa and Jagadala - Mummadi .
Pakhal lake is situated about 32 miles East of Warangal and 7 miles North - East of Narsampet , the Taluq Head Quarters and 19 miles from Nechonda Railway Station.
The wildlife and recreation is popular retreat for tourists. The lake is attracting large number of tourists. Moonlights and shores of this lake are simply heavenly.
Explore the 3.7-mile out-and-back trail near Khanapur, Telangana. Generally considered a moderately challenging route, it takes an average of 1 h 20 min to complete. This trail is great for birding, hiking, and walking, and it's unlikely you'll encounter many other people while exploring.
About 10 km from Narsampet town and 57 km from Warangal city, Pakhal lake is one of the few unpolluted lakes in India.  The best time to visit the lake is during first three or four months of the year.