Glory of prehistoric period reflects in the rock paintings in the small temple town, throwing light on the rich wildlife and tradition of Stone Age. 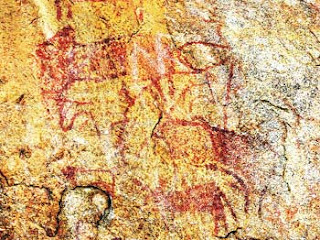 Wargal One of those marvels left behind by the history for the posterity - rock arts - seem to continue to be the delight of archeological experts and young students. Historians from Telangana are busy deciphering the ancient paintings at the rock shelters here at Wargal in Siddipet district.

These rock paintings found in parts of the State show the love humans had for art and nature as long ago as 10,000 BCE. They provide ample evidence that a large number of wild animals were present in the State centuries ago. Shambhuni Gutta (Shambu’s Hill), beside the famous Saraswathi temple here has already emerged as a great spot for explorations relating to the prehistoric life.

The roofs of the caves in the hill have red pictures. The archeological department found some of these paintings. But a lot of them are yet to be explored further. Two archeological experts - Ramoju Haragopal and Srinvas – with their assistant Chanti tried to decode the message that had been hidden in the form of art.

They found a painting of a creature that looked like a crane and three persons at the southern side of the cave. Among the three, one is a female. The depiction resembles the paintings found at Asthalapur in Medak district. Most of the paintings found on the roof look like scripts. The circles and semi-circles of this script seemed to be difficult to interpret. Letters that sound ‘Ya’, ‘ka’,’tha’,’ga’ of Brahmi script along with letters of early Telugu are seen on these walls.

Different paintings depicting the culture and traditions of that time on a huge rock canvass of 12 feet height and 25 feet length can be found on the eastern side of the hill. More than 20 paintings of oxen, cows with udders, pigs, and a man hunting a tiger are seen on this portrait. Another man’s painting is unclear. All these paintings are of great skill and are in colour and without colour.

An anthropomorphic drawing resembling the depictions at Neeladri rock art found in Khammam district is also seen here. The drawings of animals like deer, stags, and tools denote that the scenery belonged to the medieval period. According to the observations of historians, the period of the paintings were spanning from medieval stone age to megalithic age. Central India is the richest zone of prehistoric rock art in India.

The highest concentration of rock art sites is situated in the Satpura, Vindhya and Kaimur Hills. These hills are formed of sandstones, which weather relatively faster to form rock shelters and caves. They are located in the dense forest and were ecologically ideal for occupation by primitives. They were used for habitation in the Stone Age and even in the later periods. Inside the caves on the walls and ceilings, artists painted their favourite animals or human forms, symbols, daily life hunting and fighting.