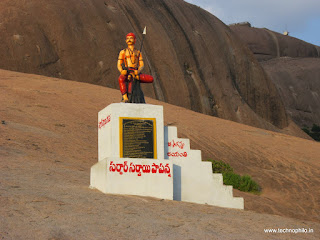 Mandal, Jangaon District. He fought against the Muslim rule in Telangana.

Papadu (also known as Papanna and Pap Rai) (died 1710) was a highwayman and bandit of early-18th century India who rose from humble beginnings to become a folklore hero.

His deeds have been described by historians Barbara and Thomas Metcalf as "Robin Hood-like", while another historian, Richard Eaton, considers him to be a good example of a social bandit.

Papadu lived during the period when the Mughal Empire had expanded its interests in South India and when tensions between the Muslim ruler Aurangzeb and his Hindu populace were rising.

Towards the end of his life, after the death of Aurangzeb and amid the subsequent power struggle for succession, Papadu was able to dramatically enhance his fortunes, in particular as a consequence of a raid on the wealthy city of Warangal. Although of humble origin, he assumed some of the manners of a king.

Papadu had no desire to remain a lowly toddy-tapper and his refusal to work in the traditional occupation of his caste was one of his early acts of defiance. It has been speculated that the contradiction between the position of his caste and the roles in society that his father, brother and sister may have attained could explain Papadu's refusal to accept the restrictive ritualised norms. That he later married a woman who was almost certainly not of a toddy-tapper caste, since she was the sister of a faujdar(military governor), is also a possible indicator of this.

In 1709 Papadu demonstrated his desire for recognition when he attended an audience at Hyderabad with Bahadur Shah I, who by that time was beginning to assert some authority as emperor in the fractious post-Aurangzeb court power struggles. The bandit gave the emperor an array of wealth in his search to be recognised as a tribute-paying chieftain, and he was rewarded with an honorific robe. Loud protests followed this recognition, especially from influential Muslims of the area whose relatives had been kidnapped and people who decried that an emperor would recognise a person of such low caste.

Yusuf Khan, the Hyderabad governor, sent a force of several thousand to besiege Tarikonda and this became a prolonged affair, lasting until March 1710. At that point, Yusuf Khan determined to take personal charge, doubling the number of imperial forces to around 12,000 and being further aided by the provision of at least 30,000 soldiers – cavalry and infantry – supplied by local landowners. This concentration of support from Hindu chieftains, together with the fact that they were the first to oppose him when he was originally based at Tarikonda and evidence that he attacked both Muslims and Hindus, demonstrate that Papadu's motivations and the popular support for them were not based on religious considerations. Claims that he was a "Hindu warrior" are further negated by analysis of the names of his followers noted in the ballads, which appear to demonstrate that those within his group included Muslims and non-Hindu tribal peoples in almost equal proportion to Hindus.

Despite the considerable forces set against him at Tarikonda, it was bribery that caused significant losses for Papadu: his men, by now weary, hungry and demoralised, were tempted to defect by offers of double pay made in May. The final straw was when Papadu ran out of gunpowder and was forced to flee in disguise. Although wounded, he was able to reach the village of Hasanabad before being betrayed by a toddy tapper and captured by the brother-in-law who had previously been his prisoner. He was executed a few days later.

He was captured and executed in 1710. The traditional accounts say that the method of execution was that of decapitation, and that thereafter his body was cut into pieces and his head sent to Delhi.

Between 1702 and 1709 Papadu and his men were besieged four times while occupying the fort at Shahpur.

Much of the information relating to Papadu is of the quasi-historical type. His exploits, and those of other folk heroes of his area and era, are documented primarily in ballads that have passed through the generations and are still sung locally. It is in the context of studying folklore and linguistics that much of the evidence, such as it is, has been collected. However, there is also the work of Khafi Khan, a contemporary chronicler who based his writings on official reports circulating in the Mughal empire.

At the base of the Bhongir fort is a statue of Sardar Sarvai Papanna, a chieftain who is believed to have defended the fort against the rulers of Golconda.

In the 1690s he stole money and property from his wealthy widowed sister. With these funds he built a hill-fort at Tarikonda and drew a band of men around him who were willing to become highwaymen, and then proceeded to rob traders who used the nearby route between Hyderabad and Warangal, the erstwhile capital of Golkonda.

Having seen the oppressions and atrocities committed by Mughals, Pappanna raised a small army out of warrier castes through guerilla attacks on them.

Papadu was strengthened, by this success. On 31 March 1708 he initiated an attack on the heavily fortified former capital city of Warangal with a force of between 2500 and 3500 men. This action was planned to coincide with the eve of the Muslim celebrations of Ashura, when the city walls would be poorly manned.

However in his tenure of 30 years Papadu ruled boldly and brought in Socio-Economic Equality in the society!