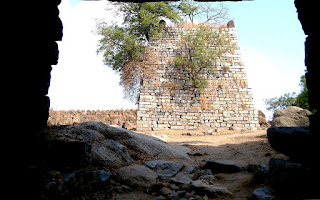 Authorities of the State Archaeology department are planning to develop the Quilla (fort) at Quilla Shapur or Quileshapur village of Raghunathpally mandal in Jangoan district, thanks to the State government’s commitment to conserve monuments.

A detailed project report (DPR) on the development of the fort built in 18th century by Sarvai Papadu, popularly known as Sardar Sarvai Papanna, has been prepared by the department of archaeology and museums and the worth of the proposed works is Rs 50 lakhs.
Incidentally, Telangana State Tourism Development Corporation (TSTDC) chairman and former DGP Pervaram Ramulu and former minister Ponnala Lakshmaiah were born in the village that is located about six kms away from Hyderabad-Warangal highway.
Though the fort was built with stones, the walls and the ramparts have already developed cracks as no attempt to conserve this fort was made so far.
Considering the historical value of this fort, the State archaeology department included it in the list of the monuments of the erstwhile Warangal district.
Pervaram Ramulu, who is keen to make his native village a tourist place, along with the officials of the TSTDC and tourism department as well as archaeology department, visited the fort a couple of months back to chalk out plans for its development.


Speaking to Tabloid Today, Director of Department of Archaeology and Museums NR Visalatchi said that they had already submitted a DPR with the proposal to take up Rs 50 lakh worth works in the first phase.
Meanwhile, as many as eight stone cannon balls (round shots) have been found when the labourers were digging the area under NREGS at the fort a couple of days back.
An archaeology and history enthusiast R Rathnakar Reddy, who visited the fort, urged the officials to take steps to preserve the cannon balls at the museum. “We cannot see the cannon balls at Hyderabad, Hanamkonda or Karimnagar museums,” he added.