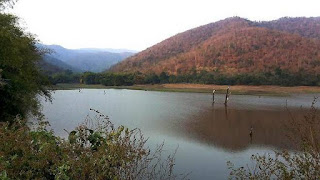 The eco-tourism potential of the scenic spot at Puligundala tank, encircled by thick woods in Kallur mandal, has caught the attention of the Tourism Department.

Nestled in the lap of nature amid lush green surroundings and flanked by hillocks, the picturesque spot located at about 70 km from the district headquarters town of Khammam, has the potential of becoming an ideal weekend getaway.

The enchanting waterfall on the nearby hill range add to the scenic splendour of the site.

An old Siva temple at Brahmalakunta, a village surrounded by several tribal habitations, nearby the Puligundala tank, draws devotees in hordes during the Kartika Masam.

A team of officials headed by Director of Department of Tourism Sunitha Bhagwat visited the spot on Monday.

Impressed by the promising potential of the site to become an ideal destination for nature lovers, the team mulled the idea of developing the site into an eco-tourism centre.

Located quite away from the hustle and bustle of the city life, the picturesque spot at Puligundala offers tremendous scope for organising trekking, bird watching and other tourism promotion activities, said Suman Chakravarthy, District Tourism Officer, Khammam. If developed, the spot would become a favourite eco-tourism destination. It would in turn give a major impetus to tourism promotion and help augment income generation activities for the benefit of local tribal youths.

The Tourism Department is mulling a proposal to promote the community-based eco-tourism project at the site, he said, adding that the proposal will be forwarded to the Forest and other concerned departments soon.