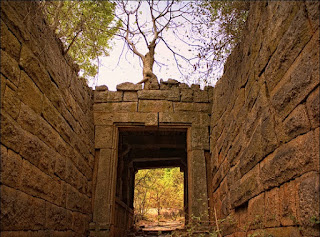 Rachakonda Fort is a 14th-century fort located in Rachakonda, Narayanapoor Mandal, Nalgonda District, Telangana State, India.
Rachakonda Fort was the capital to the Rachakonda region was first ruled by Kakatiyas and then it was taken by Padma Nayaka dynasty, from them it is concurred Muslim Bahmani Sultanate in1433 AD. Qutub Shahi and Nizams also ruled this kingdom.


The architecture Rachakonda Fort is of medieval Hindu fort architecture. It is a structure made of large stones which are of irregular size and indefinite shape. The fort is constructed without using any Mortar. At the entrance, there are gates that are made of stone pillars and horizontal beams. The exterior walls of the building are built with stones and the interiors are layered with mud. The structure of Rachakonda Fort was strategically developed as a defensive bastion with strong fortifications. It was one of the most prominent structures during the pre-firearms era.
Rachakonda Fort has now become the excellent weekend spot for the people of Hyderabad. Visitors can have an exciting experience because of its nature and climbing the hill gives a memory of Rachakonda fort. It has become the tourist place of Hyderabad.

Its history dates back to the 14th century, when it was constructed by Recherla Singama Nayak, the founder of a new clan of kings (previously serving the Kakatiya dynasty rulers as military commanders since the 12th century) and governing the territory of Rachakonda.

At a distance of around 60 kms from LB Nagar, after crossing the famous Ramoji Film City, is Rachakonda, a not-very-well-known forest area. Besides the lush jungles and gorgeous rock formations, this area also houses the famous Rachakonda Fort. For those interested in history, this fort is a visual delight even though it is in shambles.

Visiting the Rachakonda forest area that houses the famous Rachakonda fort is a visual delight to those who love history, architecture, forest, interesting rock formations, and tribal life.

Driving in the Rachakonda area is would also be an enchanting experience because one gets a chance to see green pastures and tribal hamlets, about 20 ancient temples located either side of the curvy roads at a time.

Starting the journey from Choutuppal to reach the fort, you would find the temple of Sarala Maisamma, a tribal goddess, near Allapur. Sarala Maisamma attracts tourists in droves even from Hyderabad because it is situated very close to the State capital and can be reached from Gudimalkapur village.

After offering prayers at the Sarala Maisamma temple, one can find about 20 interesting ancient temples and other interesting structures constructed by Rachakonda rulers if one proceeds a couple of kilometres further. The first king of Rachakonda was Singamanayaka-I who declared independence in the early 14th Century after the end of the Kakatiya dynasty.

The construction of temples, boundary wall on the hill and other structures was an engineering marvel to watch because they had followed Cyclopean Masonary style, which predominately used by the rulers during medieval Indian period.

That means they had used no mortar in the building any of the structure and roughly fitted the rocks together.Siva temples

Like the Kakatiyas, the Recherla Padmanayakas also patronised Saivam. Most of the temples constructed here were of Siva.

The Bhoothan temple, the Siva temple and the Veerabhadra Swamy temple were among the very few to name. There was also one massive kacheri where the locals believe the kings organised dance and other cultural programmes.

Very close to these constructions, recently a farmer unearthed an eight-foot-high Sivalingam, which was installed in nearby place. The Sivalingam has been drawing a large number of devotees every day. If you proceed further, you would enter into Tippaigudem village of Manchal mandal in Rangareddy district. The tiny Rachakonda village, located on the foothills of the fort, falls under Nalgonda district only.

A massive entrance with close to 15-feet boundary wall welcomes us in to the fort. On the left side of the fort, there are two historical Sri Rama temples where the locals celebrates Sri Ramanavami in a grand way. The fort also has two naturally carved water tanks and many other interesting structures. The visitors from Hyderavbad are advised to take a short-cut route from via-LB. Nagar-Ibrahimpatnam- Manchala headquarters-Tippaigudem village-Rachakonda fort.

How to reach: To reach Rachakonda Fort from Hyderabad, go on the Nagarjunasagar Highway up to Ibrahimpatnam (20 km). Then take the turn to Manchala village (7 km). From there take the road to Tippaiguda (4 km). The fort is just 2 km away.