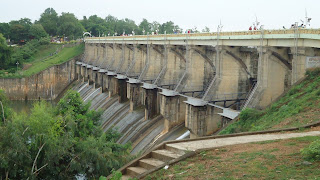 Kinnerasani Dam is located in Bhadradri Kothagudem District of Telangana marked by dense forests and is surrounded by magnificent hills.


The river flows its course through the Dandakaranya forest and the reservoir forms a 635 Sq. Kms. area teeming with wild life, also called Kinnerasani Wildlife Sanctuary.

The dam is located at a distance of 24 kms from Kothagudem and 12 Kms from Palvancha, the site of Kothagudem Thermal Power Station.

The Kinnerasani project or the Dam is a storage reservoir constructed on the Kinnerasani River in the Godavari Basin at Yanamboil village of Palvoncha mandal, Bhadradri Kothagudem District.

It was completed at a cost of Rs. 558.00 lakhs in 1966 and was inaugurated by the then Prime Minister Indira Gandhi. It provides irrigation facilities to the farmers and water to KTPS at Palvoncha for thermal power generation. The dam has a storage capacity of 233 Cu.M at the full reservoir level of 407 feet.

The scheme is intended to irrigate an ayacut of 10,000 acres benefiting Paloncha and Burgampahad mandals of Bhadradri Kothagudem District.
The forest department developed a deer park enroute the dam. The Kinnerasani sanctuary is a haven of exotic wildlife and tourists enjoy their visit here by spotting several animals in their natural habitat.

The Singareni Collieries management has constructed a Glass Rest House here that can be booked by tourists.

Kothagudem is the nearest railway station.

Buoyed by the growing response to its boating facility at the scenic Kinnerasani reservoir, located about 12 kilometres from the power generation hub of Palvancha, the Telangana State Tourism Development Corporation (TSTDC) has proposed to induct another boat into its existing fleet soon.

The move has gained significance in the wake of the ongoing infrastructure development works at the reservoir as part of the Central government assisted Rs. 16-crore eco-tourism project, which is expected to propel tourists to the site multi-fold in the near future.

Works on renovation of defunct cottages and a canteen are in progress, which are part of the sprawling Kinnerasani wildlife sanctuary extending over an area of 63,540 hectares in Kothagudem constituency.

In an effort to tap the enormous eco-tourism potential of the site which is surrounded by major tourist attractions, including a deer park, the TSTDC has mooted inducting a new boat in anticipation of sharp rise in tourists during the ensuing Dasara vacations.

The TSTDC’s boating unit earned a substantial revenue of Rs 26.76 lakh by operating two boats in the reservoir ever since the boating facility was launched over a year ago. It has also drawn up plans to introduce boating at Parnasala, an important place of tourist interest, located a little over 30 km from the historic temple town of Bhadrachalam. The corporation is also mulling introducing a one-day Bhadrachalam-Kinnerasani-Parnasala package tour, sources added.

Boating was launched in Kinnerasani reservoir in June last year to enable tourists explore the scenic splendour of the site nestled in the lap of nature, said Srinivas, divisional manager, TSTDC, Bhadrachalam.

As many as 53,240 tourists availed took the boat ride in Kinnerasani reservoir till date, he said, adding that plans were afoot to press another boat into service in addition to the existing 35-seater boat and a six-seater mini speed boat in the reservoir.