December 11, 2016
Phanigiri is a village in Tirumalagir mandal of Suryapet district, Telangana. 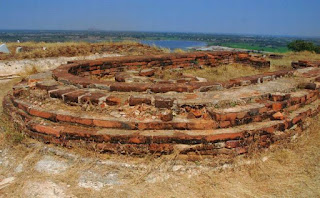 It is home to one of the significant Buddhist sites of immense archaeological importance. The name of Phanigiri village is believed to have been derived from the shape of hillock which is located on the northern side of the village that appears like a snake hood. In Sanskrit language, the word Phani means Snake and Giri means hillock.

Phanigiri is situated about 52 km from Nalgonda town. The place consists of a Buddhist complex which is adorned with a massive Stupa along with two apsidal halls with stupas in it.
Two large footprints in the complex are believed to belong to Lord Buddha. The place also houses three viharas which were once served as the dwelling for the Buddhist monks. Previously the name of the village is Dharmachakrapuram but later it is changed to Phanigir.

There are many coins discovered at this site, belonging to the Mahatalavarasa, Satavahana and Ikshavaku Kings in addition to the early historic materials dating back from1st Century to 3rd Century A.D. This is one of the rare sites in Telugu states which has yielded panels carved with Jataka Stories with Amaravati, Nagarjuna konda and Goli being the other sites.

As part of the scientific clearance works in the year 2015, archaeologists have discovered a valuable red ware earthen pot with silver container that consisted of 11 miniatures beads, three silver and three thin gold flower petals. They were found in the north eastern corner of Mahastupa, at the base of drum portion. A Potin Coin (weighing 1.3 gm and a diameter of 1.5 cm) was even collected from the surface. On the obverse side of the coin, a bust of the male figure (King) was seen while on the reverse a ship with 3rd Century AD characters were depicted.

It has been mainly classified as Mahakshtrapa. Due to such significant discoveries, it has been assessed that this Maha stupa may be considered as a Paribhogika stupa, which contains the personal belongings of Buddhist monks. The village of Phanigiri is renowned as a key site of Buddhist importance and for visitors; the site is well accessible by road from Nalgonda


Phanigiri was a major Buddhist site of learning between 3rd century BCE and 3rd century CE. It is famous for its Buddhist stupa, vihara and chaityas spread over 16 acres atop a hill.

Excavations were first carried out in the village during 1941 by then Nizam government. It was followed by another excavation in 2002. During the excavations a number of panels, articles, inscriptions, coins and inscribed pillars were found.


The Mahastupa may be considered as Paribhogika stupa (containing the personal belongings of Buddhist monks) that flourished right from Ashokan period to the 4th century CE.

A potin coin (alloy of copper and lead) weighing 1.3gms was also collected from the surface of the Mahastupa. The obverse of the coin bears the bust of a male figure (king) and on the reverse there is a ship with legend of 3rd century CE inscriptions. Preliminarily it is deciphered as Mahakshtrapa.

The officials opened the casket to find a meditation mala generally used by Buddhist monks with beads and also disintegrated lotus flower made up of gold and silver.

The relics were found in a small silver box that was kept in a small earthen pot which was put in another bigger earthen pot and buried in the stupa.

Mr. Vijay Kumar said after the death of Lord Buddha his remains were kept at eight places in stupas in the world by his disciples, but the Mauryan Emperor Ashoka, who embraced Buddhism after the great Kalinga war in 3rd century BC, had removed the relics and believed to have kept the remains at 84,000 places in the world to spread Buddhism across the globe.

Highlighting the importance of finding the relic casket, Mr. Vijay Kumar said in undivided Andhra Pradesh, archaeologists had found the relic caskets only at two places one at Nagarjunasagar and another at Bojjannakonda, another Buddhist site about 45 km from Vishakhapatnam.

According to their observation, the Deputy Director has said the Stupa, in which the relic casket was found, was renovated thrice -- during the Mauryan, the Satavahana and the Ikshvaku periods.

The fall of Buddhism in Phanigiri had started during the Vishnukundins period, but surprisingly the relic casket remained intact.

A gold coin said to be belonging to the Roman era and issued by the VIIth Roman emperor, Nero Caesar, was retrieved by the state archaeology department during their recent excavations at the Buddhist site in Phanigiri, Nalgonda district. The coin, weighing about 7.3 grams, was unearthed along with a handful of teracotta figurines, stucco images, beads made of conches and some precious stones.