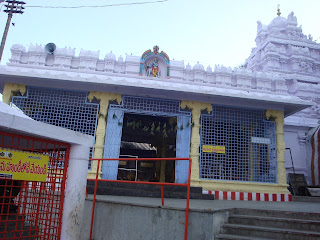 The presiding deity is Lord Venkateswara ,who is also called as Kurumurthy swami . Sri Kurumurthy Srinivas Swamy Temple, considered as one of the oldest temples in Telangana and is known for its spiritual history and traditions being followed here.


The legend says that the Lord gave darshan to a potter of kurava village and then settled on a hillock which is amidst seven similar hillocks. It is to be noted that Tirumala balaji is also settled on a hill which is one amongst seven hills . That is the reason why Lord Balaji is referred to as “Edu konDala venkateswaruDu”, or lord of seven hills. Kurumurthy is also known as second Tirupati.
Till a few years ago to see Lord Venkateswara of kurumurth , one had to really crawl inside a cave. Presently , a temple is constructed at the same place where the cave existed and it has become a simple affair for the people to have darshan of kurumurthy swami.

One has to climb about two hundred steps to reach the main temple . On the way Small temple of Anjaneya can be seen .

Also visible is the Uddala mandapam . Uddala mandapam is the place where chappals made by residents of Vaddeman village are kept. Every year , aweek after Diwali , a new pair is presented to the Lord . The shoemaker prepares these chappals with great devotion . He spends three days without food ,surviving only on milk during their preparation .At the time of presenting the chappals to the Lord , a procession is taken . The mood at that time is festive and joyful .

Sri Kurumurthy Swamy jatara, the biggest in the district, would be held for 19 days at Ammapur village in Deverkadra mandal.