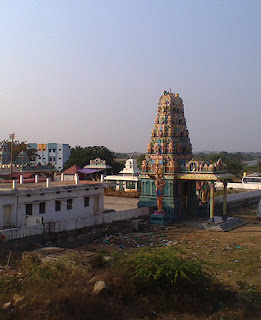 Beechupally Anjaneya Swamy Temple is located in Beechupally village of Itikyala Mandal, which is one of the famous temples of Lord Hanuman. It is located on the bank of Krishna River at about 30 kilometers downstream after Jurala Project in Jogulamba Gadwal district.

The shrine development is boosted by the fact that national highway (NH 44) passes through the village. A road bridge constructed here in 1950s helped in booming trade between Telangana and Rayalaseema regions and is considered one of the first and vital connections between south India and central/north India.

The shrine consists of a Hanuman temple located 200 meters away from the river while there is a Shiva lingam near the river. During peak monsoon, the raging waters touch the Shiva lingam temple.

Here a Lord Rama temple was constructed in 1992. The shrine also has several ghats for the purpose of pushkara snanam, which falls once in every 12 years. The Beechupally shrine is located near two islands on the Krishna River and the larger island is called Gurram Gadda village while the small island is called Nizam Konda.
The temple is popular among devotees who believe that their wishes are fulfilled upon worshipping Anjaneya Swamy here at Beechupally. The temple is located 200 yards away from the road.

As per the available inscriptions, in the areas of the Krishna and the Thungabhadra, this place had great historical importance during the time of Mouryas, Satavahanas, Ikshvakus, Chalukyas of Badami, Rastrakutas, Kalyani Chalukyas, Kakatiyas, Vijayanagar Kings and Sultans. Even today, the place is considered very sacred.

The idol of Hanuman was installed by Sri Vyasa Raya who was the guru of Sri Krishna Devaraya, the ruler of Vijayanagar kingdom. He lived between 1457 and 1539 A.D. Around 200 years ago, a spacious mandapam was constructed in the sanctum sanctorum by Gadwal kings and it is facing south and Hanuman idol is facing the east. There is a Kamili tree in the premises of the temple, which is located on the top of a termite hill. It is always seen with buds, flowers and fruits and around the tree, there is a platform. At the time of Chariot festival, pilgrims pull the chariot up to this termite hill and the Kamili tree.


The shores of Krishna River at this location are noted for carrying out obsequies to the departed souls as per the Hindu custom.

For the convenience of devotees, several ghats were built for pushkara snanam, a sacred bath that takes place every 12 years. Since then its development continued to expand. In 2004 pushkaras, the shrine was developed with greater facilities making it one of the major places for pushkara snanam (sacred dip).

It is on the Hyderabad-Kurnool route NH 44 about 2 km from Kondapeta.
Alampur is approximately 27 km from Kurnool and 214 km from Hyderabad. Alampur Railway Station is about 10 km away from the town center.