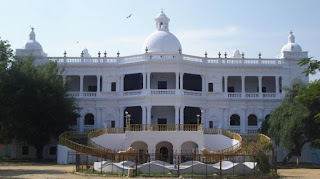 Wanaparthy Palace is also known as "Mustafa Mahal" as a name for the advice of a Muslim saint. This palace covers an area of 640 square miles.

This palace will now house the Collector's office and Collector Camp Office.

The surname of the Samsthana rulers is Janumpally.

Wanaparthy Samasthan traced its origin back to 14 century, when as the Warangal Kakatiya Dynasty crumbled, local chieftains established  their ascendancy over surrounding territory and divided it among themselves.

After Vijayanagar Kingdom was succeeded by Bijapur, Qutub Shah and Mogul successive rulers had found it expedient to maintain 8 samsthanams as buffer states along Krishna river. Wanaparthy was bounded on 3 sides by other sammsthanams.

In the time Aurangzeb, Wanaparthy became a feudatory of Moghul empire and of the Nizam as viceroy of that empire in the south.


The Rajas of the Samasthans were closely associated with the

The early Rajas of Wanaparthy kept on army of 2000 infantry and 2000 cavalry. On 17th March 1843, the title of "balwant" was conferred on Raja Rameshwar Rao as a mark of honour by Sikander Jah.

For administrative purposes the Samasthan was divided into two taluqas namely "sugar" and keshampet" under to Tahsildars. The "Maharaja" died on 22nd November 1922. He was survived by two represented in the indian government after independence.

Days Of The Beloved