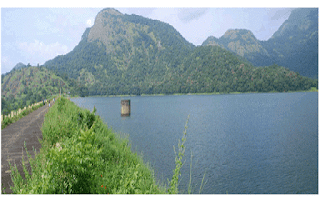 Godavari river basin.
It flows through Buldhana & Washim District & flows through border of Washim & Hingoli District. Then it acts as a boundary between Yavatmal and Nanded districts of Maharashtra. The river flows along State border between Maharashtra & Telangana before converging into Wardha river near small village called wadha in Wani Tehsil of Yavatmal district. The total length of the river in 676 Km. The main tributaries of the river are Adan, Kas, Arunavati Kayadhu & Pus.
The small Vidarbha river merged with Painganga river at village Deurwada, Wani, Yavatamal district and Kodsi village, Korpana taluka, Chandrapur district. There is an old Lord Shiva temple at Jugad, Wani the river alliance as an island. Every year at Gurupornima in the November month devotees from other places comes for worship. Before converging into Wardha River near a small village called Wadha in Chandrapur taluka of Chandrapur district. The river gets flooded in rainy and winter season and partially flooded in summer.
The Lower Penganga project was proposed by the two States on river Penganga which flows along the inter-State border, touching Adilabad, with three barrages below the main dam. The first barrage was to come up at Rajapet with cost and water sharing by Maharashtra and Telangana in the ratio of 50:50 and the second at Chanaka in the ratio of 20:80 respectively. The third barrage at Pimparad was to be implemented in the ratio of 70:30.
Korata-Chanaka barrage, being constructed at a cost of `1,227 crore, is aimed to irrigate 50,000 acres in Adilabad assembly constituency.
http://www.thehindu.com/news/cities/Hyderabad/maharashtra-clears-barrage-construction-by-telangana/article7978445.ece