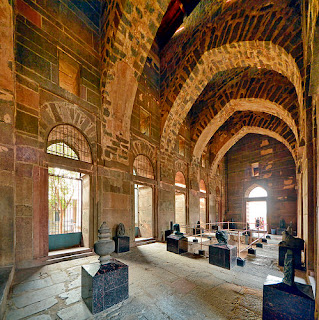 Shitab Khan also spelled Chitapu Khan, was born Sitapathi Raju in the Telangana, South India. He was from a Hindu family of cow-herders of the Boya community, then considered "low caste". He joined as a foot soldier in the army of Humayun Shah the Bahmani Sultan, and rose up the ranks to acquire senior captaincy, his own jagir (a land fief) and the title 'Shitab Khan'. He always used the title in his inscriptions but never actually converted to Islam

This warrior, regarding the reading of whose title there is no manner of doubt, is described in the Tarz'kh-i-Muhammad Qutab Shahi as“ the Raja of Khammamet, a fearless inﬁdel." This description has much puzzled Lieutenant-Colonel Briggs who, in volume III of his History of the Rise the Muhammadan Power in India, makes Shitab Khan a Hindu, and confers on him the title of " Seetaputty." The historian of the Qutb Shahi kings is, however, corroborated by the Telugu inscription in the Hanamkonda Thousand Pillar temple, bearing the date 1503, . The truth seems to be that Shitab Khan WaS a renegade Musalman who, on the disruption of the Bahmani kingdom, allied himself with Hindus and by means of their aid established a small independent principality. From the inscription we may infer that he was in possession of Hanamkonda and Warangal in 1503, and he was still in possession of the same tract in 1515 after Sultan Quli Qutb Shah’s war with the Sultan of Berar, at which period Khammame, Warangal, and Nalgonda were included in Shitab Khan's dominions.


On Sultan Quli’s return to Golconda after his campaign against Ala-uddin lmad Shah his nobles reported to him that Shitab Khan had ravaged the borders of the kingdom and was preparing for war. No attempt was made by Shitab Khan to hold Warangal, which passed without a struggle into Sultan Quli’s hands while he marched on southwards to the siege of Belamkonda. After a protracted campaign, in the course of which Shitab‘Khan received much assistance from his Hindu allies, the whole of eastern Telingana, as far as the sea coast, was conquered and included in the Qutb Shahi dominions. Shitab Khan escaped and found a refuge with his Hindu friends and though he, or, as seems more probable, a son bearing his title, caused some trouble in the latter years of the reign of Ibrahim Qutb Shah, who reigned from 1550 to 1580.


From 1480 to 1485, Shitab Khan was the governor of Rachakonda (near Narayanpur in modern Nalgonda district, Andhra Pradesh). He seems to have taken advantage of the internal turmoils of the Bahmanis and declared his independence in 1503, ruling from the Rachakonda, Warangal and Khammam forts from 1503 to 1512. He appears to have been very popular and inscriptional evidence suggests that he undertook many public works including repairing irrigation tanks and reinstating ruined temples. His stated purpose was to re-instate the great glory of the bygone Kakatiya times.

A 16x38x12 m building in fine Indo-Saracenic style still stands in the old Warangal Fort, called Kush Mahal or Shitab Khan Palace. He had the Pakhala tank repaired which still serves many farmlands in the area and is now a picturesque tourist spot.He was also a patron of literature and Telugu poetry continued to flourish in his time. His prime minister, Enumulapalli Peddanna mantri, was the patron of Charigonda Dharmanna who wrote the Chitra Bharatam, a classic of Telugu poetry. Rich descriptions of his rule are in this work.

In the turbulent regional politics of the time, Quli Qutb Shah ruler of Golconda Fort (in modern Hyderabad) was asserting his dominance and Shitab Khan had to face invasions from Golconda which was just shaking off the suzerainty of the Bahmanis. Warangal succumbed to the Golconda ruler and Shitab Khan had to flee, about 1512. He joined the service of Prataparudra Gajapati, King of Kalinga (Orissa). When the legendary Vijayanagar Emperor Sri Krishnadevaraya went on his Kalinga campaign, 1516–1517, his triumphal progress was effectively hindered by the archers of Shitab Khan at the mountain pass near Simhadri (modern Visakhapatnam district). But Shitab lost the battle and, very likely, his life there.


Historic landmarks of the Deccan by T. W. Haig