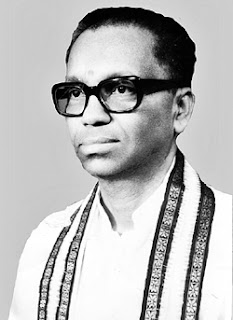 An orthodox, but discreet, Vaishnava bhakta, he was an erudite scholar of Indian mythology (puranas).

He matriculated from the Khammam Government High School but gave up higher education to join the movement against the autocratic Nizam rule in the Hyderabad Kingdom.

Freedom Fighter and Poet
As a volunteer in the left-wing Andhra Mahasabha movement, Dasarathi travelled from village to village in Telangana to enlighten the public. Mahatma Gandhi and Kandukuri Veeresalingam influenced him. However, he joined the political left, as most of his friends were leftists and communist revolutionaries.
He began writing poetry very young when he was a student. His poetry was revolutionary and was influenced by the communist ideology of Karl Marx. The downtrodden, poor, exploited, workers were his subjects in poetry. He strongly believed that the capitalist, feudalist and autocratic society under Nizam rule would give way to democracy and equality.

After the Independence of India in 1947, many independent kingdoms and principalities joined the newly formed Indian Union. However, Hyderabad State under the autocratic rule of the then ruler Mir Osman Ali Khan did not join the Union. Mir Osaman Ali Khan failed to control the atrocities committed by the Mazlis Ittehadul Muslimeen Party. At this juncture, the State Congress Party under the leadership of Swamy Raamaanandateerdha called for an action against the autocratic Nizam's rule.

Thousands of people went to jail by responding to this call and participating in Satyagraha (civil disobedience).

This book is about the Telangana Armed Struggle against Nizams rule, in which young Daasarathi served as a revolutionary. Daasartathi wrote part of his book Agnidhara while he was in jail and completed it after his release. Agnidhara book that also contained the famous lines - Na Telangana, Koti Ratnala Veena, which later became inspirational in the separate State Movement.

The poetry used to come to him spontaneously and in the jail they weren’t allowed to have pen, pencil or any paper. So he used to recite the poetry again and again so that his close friends who are with him in the same jail memorize them. Whoever came out of the jail first they wrote those poems and save them. That’s how he wrote poems for his first poetry book published after he came out of the jail, “Agnidhara,”(Flowing Fire). He hated the Muslim ruler and the atrocities committed by his followers during his rule, he called him, ‘Nizam Raju Taratarala Booju,” (Nizam is like the spider webs spread out for generations). He wrote this on the walls of the jail with coal. Recently this jail cell is named after him, ‘Dasarathi cell.’ He never feared in criticizing with strong words, ‘Musali nakkaku racharikambu dakkune,’ (Is the old fox going to get the power?)

Daasarathi said that the "Nizams brutal rule, Peoples woes under his rule, Indian Independence, Entry of Indian Armed Forces to free Nizams state and the fall of Nizam" as the inspiration for his writings.
Dasarathi was arrested in 1947 and was sent to Warangal central jail, along with many other leaders who went on to prominence in independent India. Dasarathi was later moved to Nizamabad central jail. While in jail he wrote poetry. After his release he left Telangana for Vijayawada and wrote poetry against the Nizam in Telugu Desam, a daily paper devoted to news and articles related to Telangana and the Nizam's rule.

When everything settled graduated with Bachelors degree from Omani University, Hyderabad.


His other works include Rudraveena (1950)

Ghalib Geethalu is the Telugu translation of the poems of Urdu poet Mirza Asadullah Khan Ghalib.

‘Who are the rulers who ruled different places here? I’m everything! I’m myself Telugu, I’m Velugu (light)!’

Dasarathi had very sensitive health. That’s because when he was a prisoner they used to mix toxic things in his food which has damaged his digestive system. I remember him being always careful about his diet and taking care of health. He got diabetes when he was very young and used to take insulin. He was scared of surgeries so he used to take good care of himself by eating healthy and easily digestible food.

He always greeted with peculiar way of saying, ‘Hello, Hello, come I’m so pleased to see you,’ and extend his hand for a shake.

Recipient of Sahitya Academy Award for his poetic work book Timiramto Samaram (Fight against Darkness) in 1974.

He also rendered services as an emeritus producer for All India Radio and Doordarshan (Television).

1977 - 1983 : Served as the Government Poet.
The State of Andhra Pradesh, by its G.O.Ms. No.862 dated August 19, 1977, had appointed the petitioner as poet Laureate in Telugu with effect from 15th August 1977. Initially the appointment was limited for a period of five years. The Government issued G.O.Ms.No.514 of 30th May, 1981 converting the petitioner's limited term of appointment into one of life appointment.

January, 1983 : But, with the assumption of office by a NTR Government that came into power in January, 1983, all that was changed. The new Government had terminated the petitioner's appointment as Poet Laureate.

13 July 1984 : Dasarathi challenged the termination and went to Andhra Pradesh Hight Court and the case was dismissed on 13 July, 1984.

Dasarathi Krishnamacharya died of deep anguish after he was meted out humiliation in the hands of former chief minister N T Rama Rao. This was stated by Telangana Rashtra Samithi ideologue Prof K Jayashankar. He recalled that NTR, when in power, had insulted Dasarathi and removed him from the post of the official poet of the state government. No newspaper or media has written anything about Dasarathi's death.