May 05, 2019
Sri Neelakanteshwara Temple is located on a beautiful Highway to Nagpur in the centre of Nizamabad Town is famous for its architecture.

Apart from architecture, there is another unique factor to this temple. It is the presence of the Big Three here: Lord Shiva in Linga form, who is Swayambhu; Lord Vishnu lying supine like Lord Padmanabhaswamy and Lord Brahma sitting on his lotus. Devotees throng this temple because of the presence of the Holy Triumvirate.

Kanteshwar is popular for an ancient temple dedicated to Lord Shiva. The temple is said to be about 500 years old and stands as an example of the architecture of the time during which it was built. This ancient temple was built by Satakarni II for Jains, who was a popular Satavahana King.


During Kakatiya period, the Jain mandiram was converted to a Shiva temple when many Jains also converted to Hinduism. The structure resembles the Nagara style or Hindu architecture with influences from north.

While some legends say that the temple could be close to 1,400 years old, it is older than 500 years and represents a mixture of great architectural history, with artwork on walls and pillars of the temple.

While the Nagara influence dominates, one can see Chalukyan influence on the temple gopuram and the outside of the temple and Kakatiya influence is there all over, including the outer region of the temple, with its small floral contributions. There is a protective wall, almost like a fortress, around the temple.

While the sanctum sanctorum has the three Lords and you can worship all of them together, the outside is replete with pillars, some on a raised platform on either side of the idol of Nandi, the guardian deity of Kailasa.

The Rathasapthami festival celebrated here every year, is very popular among devotees. 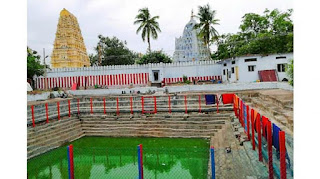 There is also a legend which says that the Sun rays fall on the Shiva Linga only on the Rathasaptami Day (Chariot ceremony).

Kanteshwar Jatara is organised on the premises of the temple. A large number of devotees throng to the temple for the darshan of chariot (Ratham).

The temple’s ‘gali gopuram’ (a monumental tower) stands tall and people can worship it from far away even before approaching the temple.

Many come to fulfill their wishes and pray to Lord Shiva to whom this temple is dedicated.

It is believed that the Lord here grants one’s wishes if you pray with fervour. This temple and many other ancient temples in this region came under Sirnepalli Samasthanam.

While the name of the temple suggests that you will see an icon of Lord Shiva with a blue throat, it is not the fact as the idol is in ‘Linga’ form.

The temple gains its name according to a legend that in a war between Gods and demons, there was a churning of an ocean and this brought forth gems and poison ‘halaahala’ which would have destroyed the entire creation. So both the Gods and the demons approached Lord Vishnu for help who in turn sent them to Lord Shiva.

Lord Shiva is believed to have drunk the entire poison and it is said that his consort Parvati Devi caught hold of his throat so that the poison does not move down his body which gave a blue colour to the Lord’s throat. Thus, Lord Shiva also gains the name ‘Neelakanteshwara’ due to the presence of the blue throat.


All pillars are made of stones but the variety of stone used is also different within this small space, speaking of the various influences. Local people point out the fact that there are three flowers on one pillar whereas other pillars have only one flower. Some eccentricity or lack of time of the sculptor, probably.

There is also a Dakshinamukhi Aanjaneya Swamy outside the temple. Normally, Lord Aanjaneya faces east but he is supposed to be facing south here because Sita Devi was in Lanka then, says chief priest Suhas Shakai.

One must not forget to mention the beautiful Nandi, sitting in front of his favourite Lord.

Previously made of one single stone, the idol looks handsome, with all kinds of paint on him, spoiling his looks, but some are happy that the paint is peeling off.

The whole ancient feel of the temple comes from the pillars, the Nandi and the beautiful work done on the walls, pillars and the roof in the inner part of the temple.

The temple stands on three acres of land and stone tiles have been laid for the walkway and an awning covering half the temple as protection against weather, while a small herbal garden is there amidst the walls of this ancient temple. There are other gates, with monkeys as gatekeepers. On the other side of this temple is a very beautiful and huge temple well, where only Utsava Murtis of the Lord are dipped, though one wonders about the plastic bags lying in the water.

There is a walking space. There are several Nandis and Shiva Lingas here too for people to do pooja. Just to give the old feel, there is a ‘ratham’ (chariot) made of wood. While the entire ratham is delicate and colourful, the bottom part of it has ‘nakashi’ art paintings of the Lords.

There is a small Tulasi plant amidst a host of huge trees of neem, peepul, palms etc. around the temple . Embedded on the wall of the temple is a beautiful Narasimhaswamy made of granite and looks wonderfully worshipped.

Next to the Tulasi is another stone statue, apparently known as Veergal or hero stone. These are found in a few places and in memory of those who lost their lives in war. Of course, there is a Lord Ganesha, in whose presence all poojas begin and he stands in granite glory and Sri Parvathi Devi has a small temple to Herself, in glorious turmeric, with a red bindi adorning her forehead.

The office room though is the best and has been kept in its original form. “We do not want to change this,” insists Temple Chairman Kovvuri Jagan Gupta. “Even in Summer, it is cooler here inside,” he said. The office room is small and has a domed roof. There is coolness about the place during the monsoon. It probably leaks but the old feel is definitely there, including an old wooden door.

The temple is very peaceful with the music of the breeze flowing through the trees and during nights, the lights come on and women walk in colourfully and chant Sloka in groups, adding to the fervour of the temple.