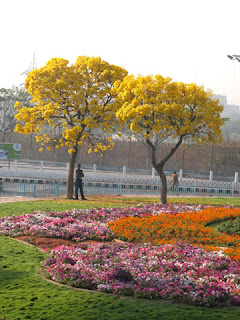 Sagar lake in Hyderabad, India. Constructed in several phases since 1999, the area that is predominantly a park is geographically located in the centre of the city, and is close to other tourist attractions such as Birla Mandir, Necklace Road and Lumbini Park.

It is maintained by the Buddha Purnima Project Authority that functions under the directives of the Government of Telangana.

It was planned to further expand this area, which has since been referred to as NTR Gardens, by constructing a museum about N. T. Rama Rao. This memorial was a part of the Buddha Purnima Project that was being handled by Hyderabad Urban Development Authority (HUDA) for the beautification and development of the Hussain Sagar lake and its surroundings as a major tourist attraction.

The Garden offers various kinds of recreational options as well. Some of these are boat ride, Japanese garden, Roaring Cascade, a Fountain, etc. There is a Children's playing area that keeps kids entertained. The massive entrance plaza with Nandi Bulls is also quite captivating.

A mini train on a single track takes the visitors all around the garden making your visit all the more enjoyable. Along with toy train, there is a wide array of recreational facilities at the NTR Garden. One of the latest additions to the NTR garden is the Desert Garden, brian child of Mr. Nitish Roy, who has designed this project. It is consisted of about 150 plant varieties, mainly of those plans which are commonly referred as desert plants such as cacti, succulents, etc. The plants, which also boast of medicinal importance and are used for various herbal remedies, have been brought to Hyderabad from various parts of the country like Kolkata, Shirdi, etc.

The garden has been created in such a way that it offers a breathtaking natural surroundings along with ample of entertaining activities. Excellent facilities for food are also provided at the garden. Various eat out joints, car cafe and fruit restaurant which is a 2000-square-metre restaurant circumvented by three petal-shaped ponds offer not just mouth watering dishes but also beautiful setting to relish the same. The Car Cafes are primarily cafes with seating capacity of six and which are mobile. This offers visitors unique cafe experiences.

Another attraction is the ‘Machan Restaurant’ which is a multi storeyed restaurant that has been built on a tree shape. The trunk has been built by using massive concrete planks while the branches are created with fiberglass and painted with green colour, giving it the look of a real tree. Also try out local food items from the various stalls such as mirchi bajji while relaxing amid the beauty of this garden.