Since it is located in the center of the city and is in close proximity to other tourist attractions, such as Birla Mandir and Necklace Road, it attracts many visitors throughout the year. 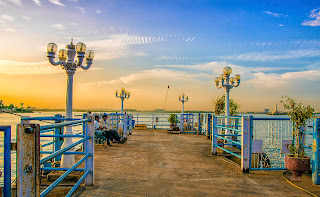 In 1994, Lumbini Park was constructed at a cost of INR 2.35 crores on 5 acres (0.020 km2; 0.0078 sq mi) of land adjacent to Hussain Sagar. In 2000, the Buddha Purnima Project Authority (BPPA) was established to maintain specially designated development areas in Hyderabad.

To enhance the inflow of visitors, it constructed additional facilities for laser auditorium, boating facilities among other visually appealing features such as gardens and musical fountains.

In 2006, the park was named as T. Anjaiah Lumbini Park in honour of the late Chief Minister of Andhra Pradesh.

On August 25, 2007, a series of bomb blasts in Hyderabad killed 44 people and injured 60.[1] One of the two blasts occurred during the evening hours in the laser auditorium that housed about 500 people at the time of the incident.[4] After a few days of being cordoned off for crime scene investigation, the park was reopened to public after the installation of metal detectors.

The park is open to visitors on all days from 9 AM to 9 PM.