November 05, 2016
Komaram Bheem was born in Oct 22, 1901 to Komaram Chinnu and Som Bai in Sankepally of Asifabad in Komaram Bheem District in a family of Gonda Tribals in the forests of Adilabad and died Oct 8, 1940 in Jodheghat.

Komaram Bheem was a revolutionary tribal leader who fought against the Asaf Jahi Dynasty for the freedom of Adivasis. in a guerrilla campaign. He gave the slogan of Jal, Jungle, Jameen ( Water, Forest, Land). It means the people who live in forests should have rights on all the resources of the forest.

Komaram Bheem will forever remain a leader and icon for his contributions to the age-long Adivasi struggle of 'Jal Jangal Jameen'. He was the heart-throb of the Gond tribes, whose hearts were in the forests of Asifabad.

He was not exposed to the out side world and did not have any formal education. 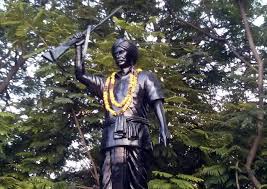 When Komaram Bheem was barely 15 years old his father was killed by forest officials for asserting Adivasis’ rights.

He was annoyed when the atrocities against the tribal families by the forest officials increased manifold. Above all, the Nizam government levied cess on the tribal people when they graze their cattle in the forest areas.
The forest officials forcibly collected this cess from Adivasis. The landlords had even taken away the Podu cultivable land from Adivasis. They had also levied heavy cess on the grain cultivated by them.

Komaram Bheem launched a massive agitation against the Nizam government in protest against the atrocities on the tribal population. He started guerrilla warfare against Nizam army.

Komaram Bheem resented the illegal cess on Podu cultivation which was a right of the Adivasis. Bheem brought the Adivasis together and waged war against Nizam army.

As part of the war, Siddique, a landlord, who grabbed the Adivasis’ land in Surdhapur village, was hacked to death. The guerrilla army of Bheem attacked a number of landlords and killed them. Komaram Bheem claimed that Jal, Jungle, Jameen belonged to only Adivasis and the Nizam has no right over here. Making Jode Ghat the centre of his activities, Bheem continued his guerrilla war from 1928 to 1940.

Unable to stop his movement, the Nizam army attacked Komaram Bheem’s headquarters on October 19, 1940 with the help of a covert, Kurdhu Patel at Jode Ghat forest and eleven Adivasi leaders, including Komaram Bheem were killed.

Thedat...thedat...police vather
The Gond rebels at Jodeghat were jolted out of their sleep early that morning in October 1940 as the women came running and shouting to wake them up.

The women, who were out to fetch drinking water , had spotted armed policemen surrounding their village as they came looking for Komaram Bheem, the tribal leader who dared to question the authority of the Nizams of Hyderabad. It was three years since Bheem had been leading a rebellion on the question of rights of tribal people to pastures and the lands being tilled by them in the forests .

Bheem, who was camping at Jodeghat with a handful of his warriors, were instantly up and got ready by arming themselves . Most of the rebels could manage to get hold of axes, sickles and bamboo sticks. Asifabad Talukdar Abdul Sattar, a personification of the Nizams’ tyrannytried to get Bheem to surrender through emissaries.

After refusal for the third time by Bheem to submit himself , Sattar ordered to open fire . The tribal rebels could do nothing but went down fighting. "As many as 15 warriors besides Bheem attained martyrdom. The incident plunged the tribals into gloom on that full moon day,” the late Maru master and Bhadu master, the close aides of Bheem, used to say whenever they wound up their narrative of the incident. Not many, however, got to see the martyrs as the bodies were burnt unceremoniously.

Hemen Darf, an anthropologist from Germany, researched the issue of tribal rights and recommended to the Nizam’s Government that it start an exclusive tribal welfare society.