The magniﬁcent temple of the thousand pillars at Hanamkonda is one of the most important parts of the Warangal City. The temple was constructed in the 1162 - 1163 AD by the great Prataparudradeva I/ Rudradeva and the deity is Rudreshwara Swamy, a personification of Lord Shiva. 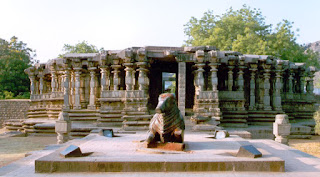 The temple has an old and long history and dates back to the Chalukyan era. Constructed in the 1163 AD by Rudra Deva, Thousand Pillar Temple in Hanamkonda is one of the finest specimens of Kakatiya architecture and sculp- ture. The temple depicts the typical Chalukyan style of architecture.
While the gopuram (tower) was tragically knocked down by vandal invaders, the main structure itself has managed to survive the test of time. The pillars of the temple in particular are known for their detail, design, and resplen- dent polish.

The temple base is a star shaped with three shrines devoted to Rudradeva (Siva), Vasude- va (Vishnu) and Surya (Sun). Siva’s shrine faces east and other shrines face south and west.

On the fourth side is Nandi. Adding to the unique- ness, the Nandi in the Thousand Pillar temple looks east, unlike most Nandis in Indian temples that look west facing Lord Siva.

The main deities are arranged in square sanctums fronted by an antarala leading to a common natya mantapa with a long portico entrance from the south. Between the temple and the portico entrance from the pavilion, houses a huge monolithic Nandi made of black basalt open to the sky. Behind the Nandi, there existed a splendid edifice, a hall of columns, nearly 300 in number called the Kalyana Mandapam. Though there are sup- posed to be 1000 pillars in the building complex, yet no pillar obstructs a person standing at any point of the temple from viewing the deity in the other temple.

Every part of the temple depicts the typical Chalukya style of architecture. The Thousand Pillar temple has three presiding deities, Lord Vishnu, Shiva and Surya Deva. The temple stands as a statement of the finest of arts of the Kakatiyas. It is dedicated -to the god Rudra, the thunderer, who seems to have been the tutelary deity of the Kakatiyas, and contains, carved on a :square pillar in what is now an outlying portion of the temple, a long Sanskrit inscription "Mahamandaleshwara (‘l the great Lord ") Rudradeva, son of Prolaraia, Jagatikesarin Kakatiya, son and successor of Tribhuvana Betmaraja of Warangal.

The sculptural beauty of the temple is a reminiscent of the rich cultural of heritage of Kakatiya Kingdom.

The intricate designs and carvings at the temple have always been a riddle to common public visiting the temple from different parts of the country and the world.

The super structure consists essential of stone columns and roof with plan dimensions of 31 m X 25m. All the pillars are carved out of coarse-grained porpheritic granite and dolerite.

The shrines have no deities except for a 'Lingam' in one of them. The huge granite Nandi, which is a splendid specimen of monolith. The Nandi figure measuring six feet in height presents itself in beautiful form with exquisitely chiseled ornaments and garlands.


The Thousand Pillar Temple perched elegantly on the slope of a hillock is one of the finest specimens showcasing the rich architectural legacy and skill in stone sculpting of the Kakati- ya Period. The rock-cut elephants on either side of the main shrine and the black basalt Nandi measuring about 6 ft in height, clearly brings out the fine carving skills of these craftsmen. Their mastery is evident from the richly carved pillars in the main temple.

This temple is one of the important tourist attractions in the city with most visitors of all the other tourist places. Almost on an average 1500-1600 visitors visit the temple every day.


Historic landmarks of the Deccan / by T. W. Haig