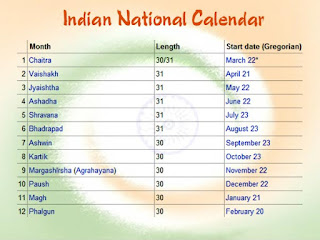 The Saka era, is used with Hindu calendars, the Indian national calendar, and the Cambodian Buddhist calendar.
It came into usage from March 22, 1957 according to the Gregorian calendar which was actually Saka Era, Chaitra 1, 1879 according to the Saka Samvat.
The zero year of Saka era (also Shalivahana era, Sakabda) began in 78 A.D.

The Christian year 78 A.D. has been accepted by most historians as the year of the foundation of the Saka Era. For centuries thereafter and till now, this era has continued to dominate the Indian reckoning of the years and time.
Western Kshatrapas (35–405 BC) were Saka rulers of the western part of India (Saurashtra and Malwa: modern Gujarat, Southern Sindh, Maharashtra, Rajasthan). They were successors to the Indo-Scythians who invaded the area of Ujjain and established the Saka era (with Saka calendar), marking the beginning of the long-lived Saka Western Satraps kingdom.

The Satavahana king Shalivahana (the king titled as Shalivahana is Gautamiputra Satakarni) is credited with the initiation of the era known as Shalivahana Saka to celebrate his victory against the Sakas in the year 78 CE.
The Saka calendar used as the official civil calendar in the country is the National Calendar of India.
It is used in India besides the Gregorian calendar by the Gazette of India, news broadcasts by All India Radio, calendars and communication document issued by control of Government of India.
The Saka calendar, often referred as the Hindu calendar is originally named as Saka Samvat. It is also used for the calculation days of religious significance in the Hindu Religion in the country. You will always find a Saka calendar alongside a Gregorian Calender in an Indian Home.
Formation of Saka Calendar In the Indian civil calendar, the initial period is the Saka Era. The Calendar is said to have begun with King Salivahana's accession to the throne.
It is used as a reference for most astronomical works in Sanskrit literature written after 500 AD. The calculation of dates in this Calendar are done in accordance with the actual positions of Sun and Moon in the universe.
Adoption of Saka Calendar as National Calendar The current national calendar of India i.e. the Saka Calendar was adopted as the National Calendar in 1957 by the Calendar Reform Committee which also made efforts to coincide the astronomical data and harmonize the usage of this calendar after rectification of some local errors.
It was adopted as the National calendar in order to synchronize the usage of 30 different kinds of Calendar used in India at that time. An Overview of the Saka Calendar Saka Calendar is said to have begun from the vernal equinox of A.D. 79.
The Saka Calendar is similar to the Gregorian calendar on the terms that even the Saka calendar has a normal year of 365 days and a leap year has 366 days. In a leap year, an intercalary day is added to the end of Chaitra month of the year.
There are 12 months in Saka Calendar which are named as Vaisakha ,Jyestha ,Asadha ,Sravana, Bhadrapada, Asvina , Kartika Margasirsa , Pausa , Magh, Phalgura ,Chaitra.
Read more at http://www.iloveindia.com/national-symbols/national-calendar.html#K2CWJ4XgWgOZ6iSv.99
http://historum.com/asian-history/47708-founder-shalivahana-shaka-era.html