Inscriptions carved on a square pillar of highly polished black basalt, standing in front of a square chhatri to the north-east of the temple

Translation of inscription in the Great Temple, recording grant of Recherla Rudra in A. D. 1213.
(By Dr. L. D. Barnett, Litt. D.)
Obeisance to the blessed Rudresvara!

(Verses 53—54). The blest General Rudra, the sage, rejoicing granted to the god who is well established in the ever fortunate goodly town of Atukuru, to Katesvara and Kamesvara and Rudresvara, the excellent village of Nadikudi for their enjoyment. 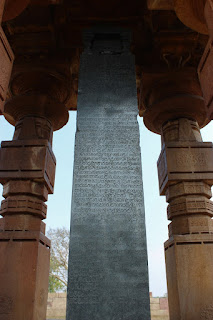