Kalwa Narasimha Swamy Temple is located in the village named Kalwa, in Koneru, in the district of Nirmal, in the state of Telangana, in South India. which is at a distance of 11 km from Nirmal.

Devotees who embark on a trip to the famous Basar Saraswati Temple, often stop by this temple, which falls on the way, to offer prayers.

The temple is known for its strict manner for following the Hindu temple tradition and culture to a great extent.

The principal deity of this shrine is Lord Narasimha Swamy. It is a medieval period Hindu temple 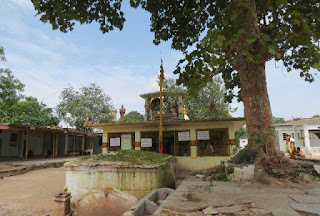 with good architectural style and pattern. It is the most sought after Hindu temple in this region that is visited by the adherent devotees of this particular region and its surrounding. This particular shrine is largely known for performing various types of special pujas on all the Hindu auspicious days and festive days as per the Vedic rules and regulations in a very strict and religious manner. The specialty of this shrine is that visitors, tourists, devotees and pilgrims are offered Vana Bhojanam or forest meal under the tree in the noon hours. No one remains hungry after reaching this shrine which is located in a hamlet deep inside the forested area of this particular region.

At Kalwa Narsimha Swamy, we can see the deity seated in a yogic posture. To his side, we see Narsimha Swamy's consort Goddess Lakshmi. This is a rare form of the God, as we see that most of the other temples usually house the more furious avatar of Narsimha Swamy. We can also see a Ratham or the holy chariot in the temple premises. The Ratham is decorated with different types of colourful flowers on special occasions and it carries the idols of gods and goddesses. The area around the temple is made tourist friendly.

Kalwa Narasimha Swamy Temple is known for its unique architectural significance and its related patterns and styles. The temple is situated in a small plot in the dense forested area. The premises have a calm atmosphere that is suitable for conducting various types of prayers, pujas, homams, yagna and other religious functions and activities to a large extent. The entrance gateway of this temple is really attractive with a small tower with images of Hindu Gods and Goddess. It is perfectly based on the South Indian Hindu temple architectural style and pattern. The temple isn't visible among the thick vegetation in the surrounding from the main road. In a religious manner as per the Vedic rules and regulations, the sub-temples in this temple complex are arranged in systematic aspects. The flooring and ceiling is really unique. The walls and pillar in this temple has large sized images that depict the glory of Lord Narasimha. The main sanctum is very a small structure when compared to other Hindu temples of this region. It largely resembles like medieval Lord Shiva temple with its actual look and other religious aspects.