April 01, 2017
The temple of Sri Narashima Swamy is located in the heart of the Town, which is popularly known to
local people as guha gudi. The ancient temple is believed t be existing from Tretha Yuga. 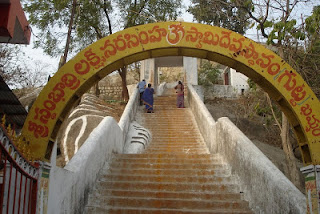 According to legends, the Narsimha Swami or Narsimhadri temple, situated on a hill called Stambhadri, is said to have existed since 1.6 million years.

The town is located on the banks of the River Munneru, which is tributary to River Krishna.

During Tretha Yugam Mouthgalya Maharishi with his disciples penance here in a cave and he was blessed by Lord Vishnu. Mothgalya Maharishi requested Lord Vishnu to stay back in this place along with Lakshmi. Lord came out of the pillar as Sri Lakshmi Narashima Swamy. Hence the place was known as Sthambadri.

Sthala Purana says in16th century, King Pratapa Rudra, who was ruling the place was blessed by Lord here. King developed the temple and pooja was arranged according to Vaikasana Agama Sthara. Panaka Abishekam on Sundays is important here. Public believe that all their wishes are fulfilled when they worship here the Lord for 40 days.