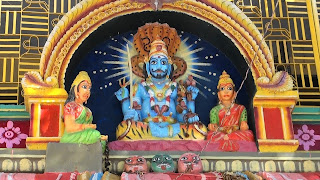 It is located near Siddipet on SH–1.

This temple is dedicated to Lord Sri Mallikarjuna swamy a fierce looking diety along with Kethamma and Medalamma on the both sides of the main diety.

The temple is located in a cave on a small hillock at a distance of 110 Kms from warangal. Lakhs of piligrims congregate on the eve of Makara Sankranthi as Brahmotsavam starts.

The Mallanna deity with Golla Kethamma and Medalamma is at the main temple. The temple is specially popular with the devotees belonging to the Kuruma and Yadava communities. The Oggu Katha singers sing the tale of Mallanna here.
The temple is visited during Shivarathri day when Pedda Patnam is celebrated.

Another temple, Konda Pochamma temple is nearby which is visited by the devotees who visit Mallanna temple.

Lakhs of piligrims congregate on the eve of Makara Sankranthi as Brahmotsavam starts.

The clay moulded diety of Lord Mallikarjuna swamy is believed to be made 500 years ago. The temple is renovated and mandapamas and choultries etc., are constructed by Endowments Department. The 'pedda patnam' celebrated on Maha Sivaratri day attract pilgrims in lakhs.

The primary deity is Mallanna or Mallikarjuna Swamy who is an incarnation of Lord Shiva. The deity is also called as Khandoba by the Maharashtrian people. The temple is located about 85 kilometers from Hyderabad.

Mallanna along with his consorts Golla Kethamma, Goddess Ganga and Medalamma, Goddess Parvati are at the main temple. The Oggu Katha singers sing the tale of Mallanna here. Devotees offer prayers to Mallanna with the help of Oggu Pujaris who draw a rangoli called as Patnam ( A form of offering prayers to Lord ) in front of Lord Mallanna inside temple and also in temple's verandah.

Large number of devotees visit the Mallanna temple during Maha Shivaratri when the Pedda Patnam is celebrated and also during the Agni Gundaalu which is celebrated on the sunday falling before the Ugadi. The festive season, called as Jatara begins from Sankranti and lasts till Ugadi. Large number of devotees offer prayers to the deity on all sundays which falls in between Sankranti and Ugadi.

Another temple, Konda Pochamma temple is nearby which is visited by the devotees who visit Mallanna temple.

There is no written script for the Lord Mallanna story. The story of Mallanna is sung in "Oggu Katha". In this Oggu katha, Swamy Mallanna married goddess Medallamma by facing conditions which are put up by her brothers. Goddess Medallamma is also called as Bramarambika, who is consort of Lord Shiva.


Also, in a recent offering from "Devon Ke Dev...Mahadev" mythological daily show on LifeOk TV channel, it has been shown that, Mallanna resembles to Marthand/Khandoba, an incarnation of Lord Shiva.