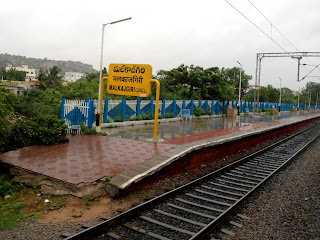 Medchal district, with 25.42 lakh population, is the second most populous district in the state of Telangana, standing next only to Hyderabad district ( 40 lakhs).

This is a industrially developed area. Medchal was previously known as Medichelama (Medi means Fig and Chelama means spring) and was later renamed as Medchal, which means town of glory. Medchal was once resort for Nizams, who constructed a beautiful mansion here.
Jain temple of Vardhaman Mahavir which is india's third most famous temple for Jains is located in Medchal. There are many dhabas, grape gardens and beautiful villas on Medchal highway.

The history of Keesara goes back to early Christian era. Keesara is the oldest inhabited place in Hyderabad city. The ruins of old fort can be on the hill.
The new district of Medchal is a true blend of all the requisite components that make an ideal district. It embraces a wide range of industries, education institutions, natural resources. One can find a delicate fusion of the urban and the rural in this new district.

Medchal is a well connected district with 3 national highways and 2 state highways apart from many roadways running across the district. The district can be described as the link between Hyderabad and the north Telangana.

Balanagar, Jeedimetla and Uppal in this district have thousands of industries. Lakhs of people from different parts of Telangana and other states work in these industries.

Medchal district is the biggest gainer in terms of new industries set up in Telangana after the introduction of TSiPass with 490 industries setting their businesses, employing 18,997 people.

The district comprises of 2 revenue divisions and 14 mandals. ——— is the headquarters of the district. Lush with urban forests, pilgrim centres like Keesara Gutta and multiple recreational resorts, the district is a weekend attraction for many in around the city of
Hyderabad.