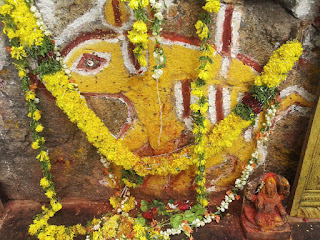 Aadi Varaha Swamy Devasthanam, the presiding deity which is as incarnation of Lord Vishnu in the form of a wild boar, worshipped by devotees in large numbers in this tiny village of Kamanpur.

Located adjoining Singareni open cast project amid thick greenery around, this is the only temple of Varaha Swamy in the country which is not installed in a sanctum sanctorum. The deity is found on a rock on a small hillock. Come rain or shine, the deity is worshipped in open by the devotees. This is the second Varaha Swamy temple in the country after Tirumala Tirupati Devasthanam (TTD).

Though, there is no demand for the construction of temple for the incarnation as it is believed that the God does not allow any construction around him and several efforts also proved futile. The locals say that the authorities should provide basic amenities such as rest rooms and dormitories for the benefit of pilgrims and proper road facilities. The existing road laid by the NTPC Ramagundam some years ago was damaged and causing inconvenience to the road users.

Devotees from far flung places visit the temple shrine to offer special prayers such as abhishekhams and other rituals.

During the Sravana masam, the pilgrims visit in large numbers to offer prayers. It is believed that the presiding deity offers ‘varalu’ (fulfill the wishes) of the devotees and hence called as Aadhi Varaha swamy.