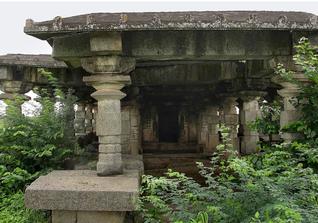 greatly patronised by the Kakatiya kings, is now in state of neglect. Perhaps the only one of its kind in the region, the rulers used to offer prayers at the temple everyday, particularly the great queen Rani Rudrama, according to local lore.

Located 12 kilometres from the Warangal district headquarters, the Ekaveera Devi temple is situated on the banks of a tank in Mogilicherla village. It was built during 1156-1196 AD and Kakatiya kings used to offer prayers daily till the empire collapsed. It was also said that Rani Rudrama was ambushed here at this temple by her opponents.

The Kakatiyas had greatly patronised temples. They also built tanks adjacent to temples where habitations too came up sustaining on the tank. Similarly, in Mogilicherla village too, the Kakatiya kings built a sprawling tank. Adjoining to the tank grew the thick bushes of Garden Marigold or Telugu Mogili Chettu. The village derived its name from it and came to be known as ‘Mogilicherla’.

The lone idol of the presiding deity Ekaveera Devi is missing and all other idols lie scattered and mutilated. With rumours of a hidden treasure abuzz, treasure hunters have plundered the temple time and again since ages.

In the absence of proper monitoring, some unidentified miscreants bombed the whole area about a decade ago shattering the wilderness and the aura around the monuments.

There was an open well constructed beautifully with rocks about a furlong from the temple which was supposedly used by visiting dignitaries of the Kakatiya kingdom in those days. Now, it lay in a dilapidated state and a haven for vagabonds and anti-social elements.

Drinking water and toilet: Not available

Security: No security.
Parking: No vehicular road to the temple.