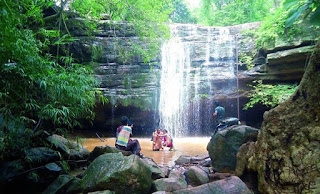 At a distance of 10 km from Gudur Bus Stand, 55 km from Warangal, 88 km from Khammam Bus Station and 200 km from Hyderabad, hidden inside a dense forest, is a picturesque waterfall known as Bheemuni Paadam (Bheema’s step)
The Bheemuni Padam waterfall came into limelight recently when determined tourists began making their way to it.

At the Bheemuni Padam, water falls from a hillock from about 20 feet in a semi-circular enclosure. Apart from the sound of falling water, it is quiet all around. It has has not been conclusively established where the water comes from. Even when the flow is less, it is used to irrigate local fields.
Visitors say the waterfall has lot of scope if facilities are provided and the tourism department markets the place. Lack of security is a concern since the area can get lonely.

This place is so beautiful. It is ideal for family picnics.

When sun rises and sets the water shines in rainbow colors which is an amazing sight. The water drops down from a height of about 70 ft to form a fool at the bottom. The flow of water is heavy in monsoon season. A cave beside the falls which is believed to be 10 km long is the other attraction here.

The approach road to the falls runs through thick forest and water streams. The waterfall is about 3 kms from Bhupathipet between Manoharabad and Narsmapet. While coming from Warangal, take left turn at Bhupathipet and reach the falls via Chinnayellapur.

Apart from the waterfall, there are several lakes nearby which can be visited as well. There are idols of Lord Shiva and Nagadevatha in a small enclosure near the falls where visitor perform poojas.

Best time to visit the waterfalls is during monsoons. Large number of tourists visit this place during weekends and on holidays.

A person named Yadava Raju get married with two women’s and raju blessed with a daughter for first wife. When Yadava Raju visited Papameda Gutha (Hills) her second wife planned to put an end to first wife and daughter.So she planned to build a house named as “LakhaMedha” with wooden sticks which can easily burns.  Pandava Legend goes that, Bheemasena set foot here to make way for water to to save her with daughter.
On the Foot of Lord Bheema the Water Get Flows and when sun rises and sets the water shines in rainbow colors which was most beautiful to capture it and never seen before.

The floating of water From Bheema Padam Connects and fills three lakes near by surrounding.

With the use of These Water from one side 2000 acres and from other side 500 acres of Agriculture lands will be cropped for every year.

Idols at Bheemuni paadam Waterfalls were lord shiva and nagadevatha where every visitor gets attracted by the architecture of idols which realize from many cause.

From Warangal to Narsampet its 59.5 km’s which can travel for 1hr 16 minutes.From Narsampet its Just 17 KMS’s, on the way at 14km take a cross at bhupathipet Village and travel for 2-3 km’s and you reach Kommula Vanch village.


Buses: Number of Busses at Warangal and Hanamkonda Bustands to Narsampet.