April 17, 2014
Founder : Poranti or Poranki Venna
Head Quarters : Katukuru
Descendants of Durjaya dynasty, like Kakatiyas and served as chiefs of army.
The Viriyala chiefs continued as subordinate/feudatory rulers for Rashtra kutas, Kalyani Chalukyas and Kakatiyas for around 600 years. Their history is reconstructed through ‘Gudur’, Moripirala, Kalukur, Pammi and Rayaparty inscriptions issued by themselves. According to their inscriptions, the founder of their dynasty was Poranti Venna.

Poranti or Poranki Venna
According to the ‘Gudur1 inscription, after several kings in the, Durjaya dynasty Poranaki Venna was born. It seems that he was an army chief under the Rashtrakutas.

Erra Bhupati
Erra Bhupati, son of Poranti Venna, succeeded his father as the chief of army of Rashtrakutas, according to Gudur inscription.

Bhima
After Erra Bhupati, his son Bhima became famous as the army chief of Rashtrakutas. The Gudur inscription compared him with the Bhima of Pandavas

995 A.D : Erra Narendra
Erra Narendra was the son of Bhima. During his period, Tailapa-II defeated the Rashtrakuta dynasty and occupied their kingdom. Kakatiya Gunda (950 -995) was eventually killed by one Viriyala Erra, who installed the Mudigonda Chalukya chief Bottu Beta as ruler of Koravi. Kakatiya Gunda sister Kuntala Devi alias Kamasani had been given in marriage to Erra. She helped the Kakatlya chief Beta I (996 - 1052 AD) to restore his kingdom after the death of Gunda.

1108 A.D : Sura I
Sura senani had become famous after Erra Narendra. According to the Gudur inscription, Sura senani killed Kataya nayaka ( Kata I / Kataya Recherla General of Beta II :1076 AD - 1108 AD) and made a person called Rawanrupa as the ruler of Velpugonda.

1124 AD : Malla
Gudur epigraph of Viriyala Malla Donor of the village Gumuduru to the god Mallesvara.It records the endowment of village Bammera, included in the Velpugonda-24 division.

Beta
Beta was the son of Sura senani. His details were given in Moripirala, Katukuru and Gudur inscriptions. His wife was Bejjamamba. He had four sons - Sura II, Malla, Prola II and Komma.

Sura II
Built a temple for god siva and a tank at Ayyanapura.

1195 AD : Annaya son of Malla
The Mylama inscription gave details about Annaya senani, son of Malla senani and his wife Aitama. The daughter of Annaya and Aitama was Mylama. She married the famous chounda senani of Malyala dynasty.

1203 AD: Mylama issued the Katukur inscription, which reveals the histories of Viriyala and Malyala dynasties; Annaya senani was a con-temporary of Rudradeva, Mahadeva and Ganapatideva.

1245 AD : Rudra The name of Rudramaraju belonging to the Viriyala dynasty was mentioned in the Rayaparty inscription but his details were unknown. 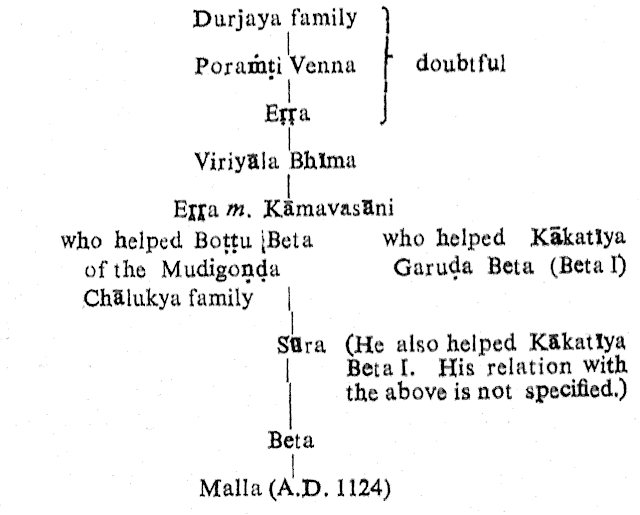 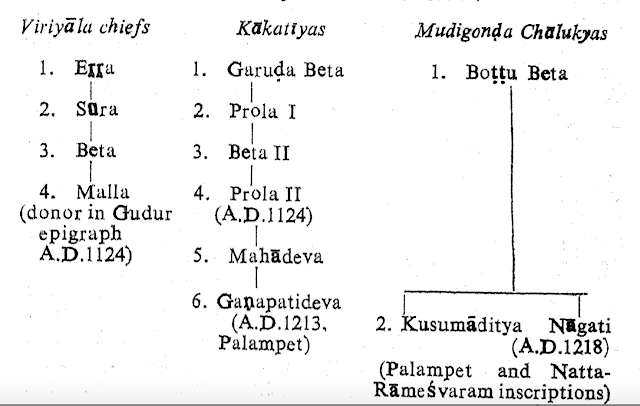