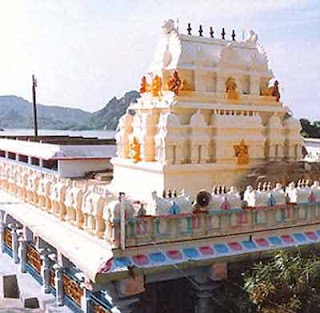 Padmakshi Temple is dedicated to Goddess Padmakshi who is fondly referred as ‘Amma’ or ‘mother.’ She is the consort of Lord Shiva. The present shrine is believed to have been built during the 12th century by the Kakatiya rulers.

The deity is also referred as Padmakshamma and the shrine is located atop a Gutta or a hill. The pond at the foot of the Padmakshi hillock is sacred.

Pillar in the temple is a unique piece of architecture. The quadrangular column is made in black granite stone and is located at the entrance of the shrine. The four faces of pillar are imposing.


The padmakshi temple is one of the oldest temples of the city, The Kakatiya King Betaraju II was the first king in his dynasty to have converted to Veerasaivism. However, prior to that all Kakatiyan kings were followers of Jainism. It was under the rule of Prolaraju II that the Kakatiyans built a Jain temple or Badasi. This was later converted to the Padmakshi temple once the rulers converted to Veerasaivism. The temple therefore bears several sculptures ans carvings scattered throughout its walls that display Jain Tirthan- karas and other motifs that bear a strong stamp of the Jain culture.

From religious and tourism point of view this area is one of the most important parts of the city. Because of the presence of Bhadrakali tem- pleandthepadmakashitempleinthisarea,all the tourists that visit Warangal certainly come to this area. Hence, there is a large number of footfall in this area all through the year.

Culturally also this area is the most import- ant part of the city.

The most important festival in the shrine is the Batukamma festival observed during Navratri (September – October). More than 100,000 women participate in the festival.