Wanaparthy Samsthanam traces its history back to 14th century after 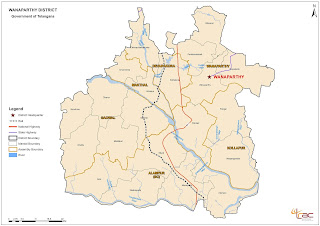 the Kakatiya kingdom declined. The successive Turkic Muslim dynasties, who invaded and settled in Deccan, found it ideal for Samsthanam to prevail. It was surrounded by three other Samsthanam.
Wanaparthy was one of the 14 major Zamindari segments in Telangana in Post-Independent India.
For administrative purposes the Samsthan was divided into two taluqs namely "sugar" and "Kesampet" under to Tahsildars.
1512 - 1540 AD : Raja VEERA KRISHNA REDDY

To build a armed force, Raja imported Siddis from Somalia and Abyssinia and organized them into 2 regiments African Bodyguard and Wanaparthy Lancers.

On account of skirmishes and conflicts between Rajas forces and Nizams the British residency intervened and arranged a treaty by which the Raja presented his regiments to Nizam and was appointed as inspector general of Nizams forces and Nizam accepted Rajas autonomy.
The Hyderabadi battalion of the Bison Division was formed on Nov. 5, 1853. The Nizam had appointed the Raja as inspector of his army and after the Raja's death in 1866, the battalion was absorbed into the Nizam's Army and became its nucleus.

1880 - 1922 AD : Raja RAMESHWAR RAO III , he was adopted from a family in Rangapuram that traditionally supplied adoptive heirs to the royal family; married and had issue. He died on 22nd November 1922, being survived by two sons.
1922 - 1944 AD : Raja Krishna Deva Rao
As his successor, Krishna Dev, was a minor, his estate was managed as a Ward of the Court. Krishna Dev himself died before attaining majority and the crown passed on to his son Rameshwar Rao III.
1944 - 1998 AD : Janumpally Rameshwar Rao III
Thereafter India abolished all regal titles
He was born on 23 February 1923 in Madras to Raja Krishnadeva Rao and Rani Sarala Devi.
He studied at Nizam College, Hyderabad, Madras University and Bombay University.

1944 : He was granted full administrative powers in 1944.
1950 - 1957 : Joined the Foreign Service  and served in various capacities till 1957, including a posting as First Secretary, India's Commission in Nairobi.
1957 –1977 : Member of Parliament from Mahabhubnagar Constituency Member of the United Nations Conciliation Commission on the Congo 1960/1961; Chairman of Orient Longman 1964/1968
He died at the age of 75 years in Hyderabad on 15 September 1998. He is survived by wife Shanta, one son and three daughters.
Among his grandchildren are the actress Aditi Rao Hydari (his daughter's daughter), and Kiran Rao (his son's daughter) who is the wife of actor Aamir Khan.
http://www.zamindar.info/index.php?option=com_content&view=article&id=40&Itemid=16

The African Dispersal in the Deccan: From Medieval to Modern Times